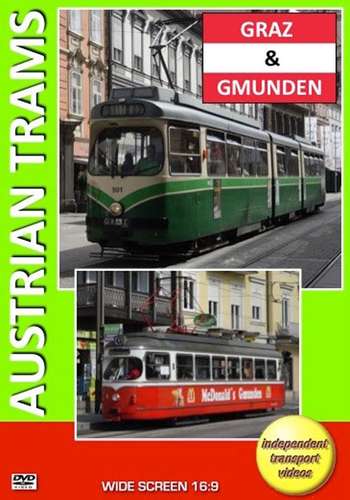 The city of Graz is the capital city of the Austrian federal state of Styriain and the second largest city in Austria. This industrial city has a very pretty preserved historic city centre. Electric trams started here in 1899 and today, though owned by the city are operated by Graz Linien, who also operate the bus network. There are eight routes on standard gauge track of 1,435mm. At the time of filming, in September 2016, this interesting tram fleet consisted of trams manufactured by SGP, Bombardier (Flexity Outlook Cityrunner) and Stadler (Variobahn). Our filming begins in the city centre. Starting on the Erzherzog-Johann Bridge and moving along to Murgasse, Hauptplatz, Herrengasse, Am Eiseman Tor we end up at the busy transport interchange at Jakominiplatz. There is plenty of action for you to view, with all types of trams seen in service. Our first journey is on SGP GT8, tram 502 on line 4 to Andritz. From here we take Stadler Variobahn tram 242 on line 5 to Maut Andritz where we change to 612, a newer type of SGP GT8 tram with a low floor centre added, on line 5 to Sackstraße for further filming in the city centre. Our next location is within the Hauptbahnhof, where we see the trams running under the station. To complete our visit to Graz, we board tram 660, a Bombardier Flexity Outlook Cityrunner on line 3 for a brief ride to Südtiroler Platz. This tram makes an interesting comparison with the other trams we have ridden on during our visit to this very smart fleet and city.

We now turn our attention to the smallest tram fleet in Austria – that of the small town of Gmunden. The beautiful lakeside town of Gmunden was built on a hillside and is surrounded by mountains, it is an idyllic location to film trams which date back to the 1950s and 1960s. The tramway opened in 1894 and is the oldest and shortest tramway in Austria. The line is only 2.3km long and is metre gauge. It has a maximum gradient of 9.6% making it the world’s steepest surviving adhesion-only tramway. It is operated by the light railway group of Stern & Hafferl. The route links the OBB Hauptbahnhof at the top of the town to the lakeside in the centre of the town at Franz-Josef-Platz. This tramway will soon link with a new tram-train (Traunseebahn) line to Vorchdorf as part of the StadtRegio Tram project. This line will open during 2017. The tram fleet at the time of filming in September 2016 was made up of No.8, a Lohner/Kiepe dating from 1962 and No.9 and 10, Düwag/Kiepe trams dating from 1952. There are also two heritage trams kept at the small depot, and used on special occasions. These date from 1898 and 1912. We begin our visit to Gmunden at the Hauptbahnhof and ride on tram 8 to Franz-Josef-Platz to view the pretty lakeside town. We then do a return journey on tram 10 to the Hauptbahnhof and back to the lakeside getting a drivers eye view on our way down, and a passenger’s perspective back to the Hauptbahnhof. On the way we stop off at the little depot and have good look around thanks to the very kind man in charge! We hope you enjoy your visit as much as we did…