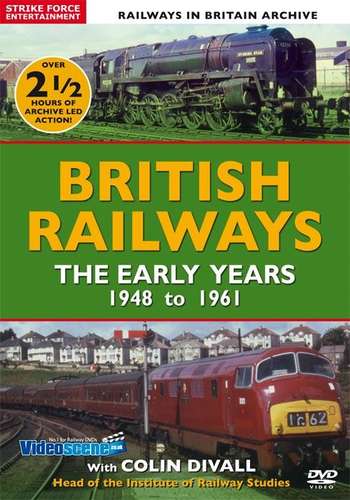 This is the original release from 2010, available exclusively from Videoscene.

This is a definitive archive film led history of the early years of Britain's nationalised rail network.

Post-War, the 'Big Four' Railway companies struggled with a backlog of maintenance of permanent way, engines and rolling stock borne of the under-investment and acute demands made on them during the Second World War.

Nationalisation as 'British Railways' came in 1948 and brought with it steam locomotive standardisation and the beginnings of the wholesale transition to diesel and electric traction as outlined in the 1955 Modernisation Plan.

The story of this time of intense and controversial change is told in definitive detail with archive film, period newsreels and testimony and interviews with both railwaymen and railway historians.

Among the locomotives featured are the A4 Pacific Class, the First diesel-electric loco no. 10000, the BR standard Britannia class, 9F class 'Evening Star', the Deltic prototype, the Peak D1, D.M.U's, Warships, Westerns, the Blue Pullman and the Glasgow Blue Electrics.