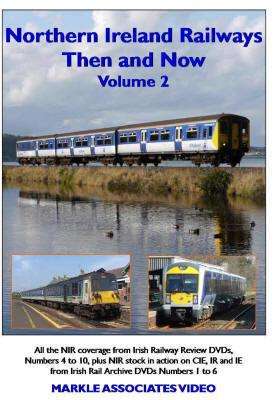 Volume 2 of NIR Then and Now is a compilation of the NIR coverage from 12 Markle videos. This time, as well as featuring trains in Northern Ireland, coverage has been extended to include NIR locos and rolling stock on CIE, IR and IE metals. Also featured is the Headhunters Barber Shop and Railway Museum in Ennskillen.

The period covered is mostly 2004 to 2011, with some scenes going back to 1985. Rolling stock featured includes the 80 and 450 class Multiple Units, along with the more modern 3000 class. Also seen are the ex-Gatwick Express Mark 2 coaches. Locos include NIR's 111 and 201 classes.