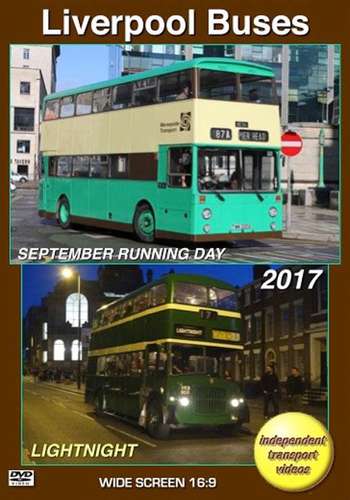 Independent transport videos welcome you to this 2017 special edition of the Merseyside Transport Trust's annual “Liverpool Buses Running Day” DVD programme. This time we have also included the “Lightnight” event that took place on the evening of Friday 19th May 2017, which is not a bus enthusiasts event as such, but equally as enjoyable! We start our programme with the annual Running Day on Sunday 10th September 2017. This year the event was centred on Mann Island at Liverpool Pier Head, Aigburth Vale, Penny Lane and Walton. Our filming opens with usual back drop of the “Three Graces” buildings and we see a very modern bus, one of the brand new MAN EcoCity gas buses in the latest Arriva ‘hybrid’ livery as well as the latest offering of new double-deckers from Stagecoach and Arriva. Getting back to the main subject of this programme, our cameras take up their positions at various parts of the city to see the preserved buses in action. We capture some early morning feeder services on Prescot Street and Daulby Street before taking up our position at Penny Lane to see a good number of arrivals and departures. Further filming locations include Smithdown Road, Prescot Road and Aigburth Vale. From here we ride on ‘Jumbo’ Leyland Atlantean 1162 (XKC 789J) to the Pier Head in a heavy rainstorm. Our Running Day filming is concluded where the day started at Mann Island, where we see the buses on the feeder services leaving and others turning to take up their final duties and then departing to the depot after a most enjoyable event. Well done to all in organising this excellent Running Day. The second part of this programme features the “Lightnight” event that is described as ‘The Free One-Night Arts & Culture Festival’. Nine vehicles were used this year comprising six Atlanteans, L501, L835, 1111, 1236, 1836 and 1003 alongside three rear loaders, AEC Regents A36, A267 and Leyland Titan L227. Filming took place from 18.00 hours to midnight and our cameras were on hand to capture the atmospheric action!

We begin at Mann Island, Pier Head and see the initial departures and then board L227 (SKB 224) for the journey to the Liverpool Metropolitan Cathedral at Mount Pleasant. Here we see the action on Hope Street before catching Leyland Atlantean L501 (501 KD) to Lime Street. The next location is Mann Island to catch AEC Regent A36 to Albert Dock where the sun is starting to get low in the sky. We see plenty of the preserved buses in action running along Strand Street, entering and leaving Liverpool One Bus Station. Upper Duke Street is the location as the sunsets and we see the buses climbing the hill with the Liver Buildings silhouetted in the setting sun. People fill the streets and the buses as the event continues. Another brief ride on L501 takes us to Hope Street where it is now dark, and we see the buses lit up full with happy passengers! Our last ride is on L227’s final journey to Mann Island. The buses leave for home as midnight approaches – the end to a brilliant event. To end this programme we see four fabulous buses – 2017 marks the 50th anniversary of pop group ‘The Beatles’ record ‘Sgt. Peppers Lonely Hearts Club Band’. Arriva have painted four current double-deckers in psychedelic liveries named after the Fab 4 – John, Paul, George and Ringo! Enjoy.