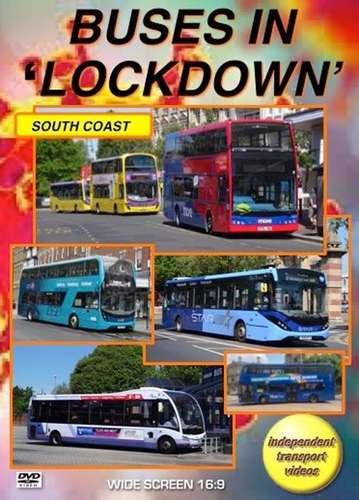 In early 2020 the world was infected with a deadly virus known as coronavirus, Covid-19. In order to control this pandemic governments across the world including the UK Government imposed a so-called ‘lockdown’ to help stop the spread of the disease. This had a major impact on the everyday lives of people and of course any travelling on public transport. By the end of May in England some travel restrictions were lifted and bus travel started to resume, but mostly for key workers that needed to travel to and from their workplaces. Following government safety guidelines the independent transport videos cameras went out to record these revised services and to capture the strange atmosphere that was once busy streets and roads in nine locations along the south coast of England radiating out from our studios in Dorset. During early June we covered an area along the coast from Weymouth in the west to Portsmouth in the east, an area that features a good array of buses from three of the big groups as well as now locally owned Bournemouth Yellow Buses.

Our filming begins in WEYMOUTH where we see buses from Firstbus that are branded as ‘Wessex’, some parked up at the depot and others in service along the Esplanade. Look out for the Enviro400 with ‘Diamond’ fleet names. This is one of a number of former First Manchester buses that were leased to Diamond in Manchester, but now returned to First. We catch up with a few more of these buses as we move further along the coast.

Next stop is POOLE. Home to Go South Coast and it’s ‘more’ brand. Here we see a good number of buses with hardly any operating on the routes they are meant for! The busy M1 & M2 routes that run between Bournemouth and Poole are usually home to ADL 200MMC single-deckers, but today we see the Swanage ‘Breezer’ Volvo double-deckers alongside ADL 400MMC ‘Unilink’ double-deckers operating those services. Double-deckers are operated due to ‘social-distancing’ rules that have been introduced. BOURNEMOUTH also has a lot to offer. Locally owned Yellow Buses are seen operating alongside a variety of ‘more’ buses as we have seen in Poole.

Moving slightly inland our next location is SALISBURY. Home to Salisbury Reds, another brand of Go South Coast. Apart from the new and old liveried buses we see brand new ADL 400MMC double-deckers in a new blue livery for the ‘Activ8’ joint service with Stagecoach to Andover. WINCHESTER is our next stop. Here we see Stagecoach in operation. A number of their former ‘the King’s city’ branded ADL 200MMC buses are now in the new Stagecoach livery. They are seen alongside similar buses in a smart two-tone green scheme for the Park & Ride routes bringing back memories of the ‘King Alfred’ buses of the past.

SOUTHAMPTON is our next port of call. Go South Coast ‘Bluestar’ is the main operator with Firstbus, branded in either ‘City Red’ or ‘Solent’ if wearing corporate colours. Here we take a brief ride on a ‘Bluestar’ ADL Enviro 400City bus that shows off the ‘social-distancing’ instructions onboard. Salisbury Reds also operate to the city from Salisbury and are seen on our programme.

Just a short distance along the coast is FAREHAM and GOSPORT. Here we see Firstbus, also branded as ‘Solent’ at both locations. Linking both towns is the Bus Rapid Transit (BRT) system operated by Firstbus – ‘Eclipse’. The smart deep purple liveried ADL 200MMC buses are seen operating between the towns along some sections of the BRT as well as at both Fareham and Gosport bus stations.

Our final location is PORTSMOUTH. Here we see both Firstbus and Stagecoach operating side by side. First has recently introduced a new fleet of ADL 200MMC single-deckers branded as ‘Star’ and painted in a two-tone blue livery. They are replacing the Wright Streetlight ‘Star’ buses that are moving to Southampton for the ‘3’ route and you will have seen some of them in the Southampton section on this programme. We conclude our programme at the redesigned bus station at The Hard in Portsmouth.