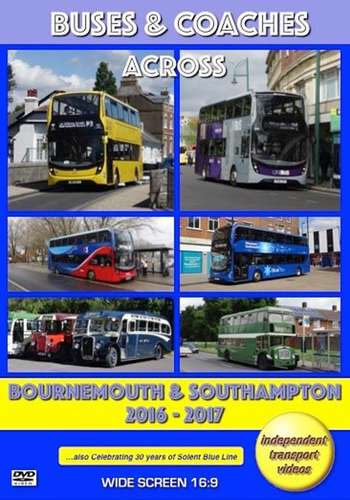 Following on from the independent transport videos successful 2016 production, ‘Buses & Coaches Across Bournemouth and Poole’, our cameras have returned to the southern coastal town of Bournemouth, but this time, instead of also visiting Poole, we go east to Southampton and attend the celebrations of 30 years of Solent Blue Line. This event was organised by Go-Ahead (Go South Coast) the company that now operate Solent Blue Line, but rebranded as Bluestar.

We begin our programme in Bournemouth during September and October 2016 and film RATP Yellow Buses and Go South Coast, ‘more’ branded buses in service. We see the ADL Enviro 400 ‘more’ buses on the busy trunk route, X3, arriving and departing from Salisbury. These buses are soon to be replaced by high specification ADL 400MMC double-deckers in a smart new livery – we catch up with the new ones later in the programme! New ADL 400MMC buses are seen on the Unilink services in a new livery, each featuring a different colour. Also new are the Breezer branded Volvo B5TLs with MCV Evoseti part open-top bodies which operate between Bournemouth and Swanage. Filming locations include Exeter Road, Gervis Place, Bath Road, Bournemouth Railway Station, Holdenhurst Road and Lansdowne. Our 2016 filming concludes at Ringwood in December, where we see the aforementioned new X3 buses on their first day in service.2017 filming begins in May at the busy Gervis Place in the centre of Bournemouth. It is also the first day in service for the Yellow Buses new ADL 400MMC double-deckers. They are so new that only the fleet names have beenapplied with the latest branding still to be added. We catch up with the other vehicles in the Yellow Buses fleet as well as the many ‘more’ buses passing through this busy thoroughfare and Exeter Road. On the same day our cameras also visited Christchurch to record the operations in this pretty coastal town, where we film in the High Street and Castle Street. From Christchurch you are now in for a treat! Our cameras were on hand to see the arrivals and departures of preserved former Royal Blue coaches and associated coaches from companies of the erstwhile Tilling Group on their annual ‘Royal Blue Run’. On a beautiful sunny Saturday morning we record the 2017 event with our cameras at Queens Park off Poole Road in Bournemouth. We also catch up with some of the coaches running through Shaftesbury the following day.

The final part of this programme is devoted to Southampton and the celebrations held on Sunday 4th June marking the 30th anniversary of Solent Blue Line. The event was held at The Bargate in the city, with a network of three routes leaving from Pound Tree Road covering the areas served by Solent Blue Line.With plenty of movements recorded in the nearby streets, our cameras took rides on buses that were familiar to Southampton in days gone by. These included former Hants & Dorset semi-automatic Bristol FLF, 1557 (LLJ 443F), Hants & Dorset Bristol VRTSL3/6LXB, 3402 (BFX 570T), Wilts & Dorset liveried Bristol VRTSL3/6LXB, 4413 (BFX 666T) – still owned and operated by Go South Coast for special occasions and ‘The Old Girl’ from Southern Vectis, the 1939 Bristol K5G ECW open-topper, still in service with its original owner. So from the very latest buses to the oldest bus still operating with its original operator there is plenty of interest in ‘The Buses & Coaches across Bournemouth and Southampton’.