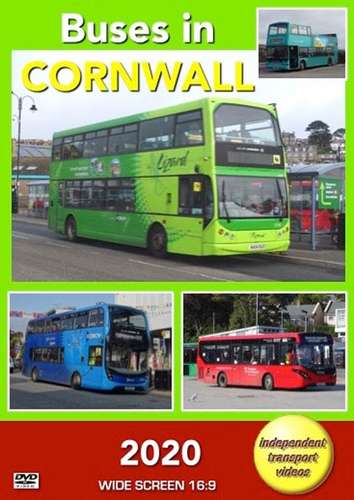 The county of Cornwall in England’s south west has always been a magnet for both holidaymakers and bus enthusiasts alike. A lot has changed from the Tilling and National Bus Company days of Western National through to Deregulation in the mid 1980s. Today in the twenty-first century the main bus operators are ‘Firstbus’ and ‘Go-Ahead’. Up until the early part of 2020 ‘Firstbus’ (First South West) was the major player, branding some of their buses at Cornish depots as ‘Kernow’ in a smart two-tone green livery. There are a number of variations of the livery layout such as two-tone blue for university routes, or a turquoise livery for the ‘Coaster’ routes many of which are operated by open-top double-deckers. ‘First’ has invested heavily in new buses in recent years, including ADL Enviro 400MMC double-deckers and the smaller version of the ADL Enviro 200MMC single-decker.

However the ‘Go-Ahead’ group began to operate into Cornwall from the Plymouth area with their ‘Go Cornwall Bus’ brand and in March 2020 ‘Go-Ahead’ won an eight-year contract to run all of Cornwall Council’s supported routes. The new operation is branded ‘Transport for Cornwall’ and the livery is all-over red. Over 100 new buses have been ordered to operate these services, the vehicles being mostly ADL Enviro200MMC single-deckers. However, due to the ongoing coronavirus pandemic not all the buses could be delivered in time for the start of the contract so ‘Plymouth Citybus’ had to supply buses from the Plymouth fleet to operate some of these new services in Cornwall. In addition a number of ‘Firstbus’s 2018 delivery of Enviro 200MMC single-deckers have been transferred to ‘Transport for Cornwall’ and are seen in this programme. ‘First’ have also transferred a number of buses from all over their UK businesses to run their enhanced services in Cornwall arising from the pandemic’s requirement for social distancing.

The filming of this programme took place in September 2020. The independent transport videos cameras will take you on a tour of the county seeking out the buses operating on a wide variety of routes. We begin our journey in the east of the county at Launceston and travel south west to Land’s End. From here we continue along the north coast and end up at Bude. Our locations include Launceston, Liskeard, Looe, Bodmin, St Austell, Truro, Falmouth, Penzance, Land’s End, Camborne, Newquay and Bude. You will also see a ‘Roselyn’ East Lancs bodied Dennis Trident in St Austell that originally ran with ‘First’ in Bristol as their 32714 (W714 RHT), a former ‘Plymouth Citycoach’ on driver training duties in Newquay and a ‘Stagecoach’ Enviro400 in Bude, having completed its long journey from Exeter. The interesting variety of ‘Firstbus’ vehicles, brand new buses on ‘Transport for Cornwall’ services and with many buses running from ‘Plymouth Citybus’ makes this DVD programme fascinating to watch.