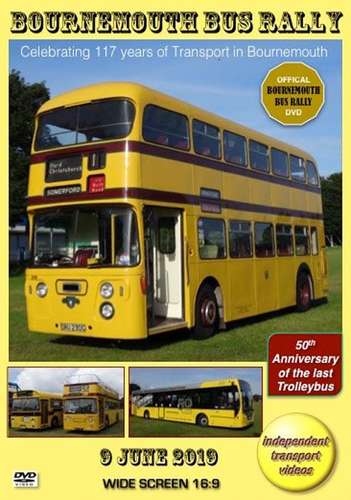 A warm welcome to our DVD programme of the third Bournemouth Bus Rally. The independent transport videos cameras were proud to be asked back by the organising team to produce this official DVD of this super event that took place in King’s Park, Bournemouth on Sunday 9th June 2019. As a supporter of the event, we were on site very early in the morning to record the arrival of the buses and coaches as they took up their positions on the rally field.

As always the event was keenly supported by the two main local bus operators, RATP Dev UK – Yellow Buses and Go-Ahead South Coast - ‘morebus’. This year the celebration was for 117 years of public transport in Bournemouth and the marking of 50 years since the last trolleybus ran on the streets of Bournemouth. Unfortunately, there were no trolleybuses present, but to make amends Yellow Buses displayed their ‘History Bus’ - 30 (YX65 RGZ), an Alexander Dennis Enviro200, in which the interior is adorned with images of trams, trolleybuses and buses of Bournemouth Corporation in years gone by. The exterior is also suitably lettered to mark the occasion. You can see Bournemouth Trolleybuses in action on our DVDs entitled “Bournemouth Trolleybuses” and “Bournemouth Buses”. Yellow Buses sent a good selection of their current fleet, each one representing a route that they travel on. Quite a colourful sight, as all routes operated by Yellow Buses are colour coded.

The older order was not forgotten as a good number of preserved Bournemouth Corporation buses were in attendance. These included Leyland Tiger Cub PSUC1 – 266 (RRU 903), Leyland PD3 – 159 (8159 EL), Leyland PD3A - 167 (6167 RU), Daimler Fleetline - 184 (CRU 184C), Daimler Roadliner - 55 (KRU 55F), Leyland Atlantean - 230 (ORU 230G) and Dennis Dominator 262 (H262 MFX). Most of these buses had travelled a good distance to get to the rally. Open-top Daimler Fleetline 184 was undoubtedly one of the main stars of the show. It had not been seen for many years and it is a tribute to its owner, Nick Jackson for all the hard work he has put into it, getting this bus up to the high standard we see today. Driven by Nick, 184 was used to take the Mayor on a brief tour of Bournemouth and later in our programme our cameras also take a ride reliving many memories of these lovely buses from the mid-1960s. Preserved buses and coaches from the Bournemouth area and beyond were also in attendance. Some of the fleets represented were Hants & Dorset, Southampton Corporation, London & Country, London Transport, Wilts & Dorset, Ribble, Damory, Southern Vectis and many independents, to name but a few. Current operators also joined in with Stagecoach and Go South Coast’s ‘Salisbury Reds’ showing off their latest vehicles and liveries! We film the action throughout the day in and around King’s Park including the buses and coaches leaving for home.

Final scenes are filmed on Bath Road, close to the seafront as a cavalcade of Bournemouth buses, both past and present make their way through the town. A big thank you to all concerned for organising the 2019 Bournemouth Bus Rally. We hope that you enjoy our record of the day.