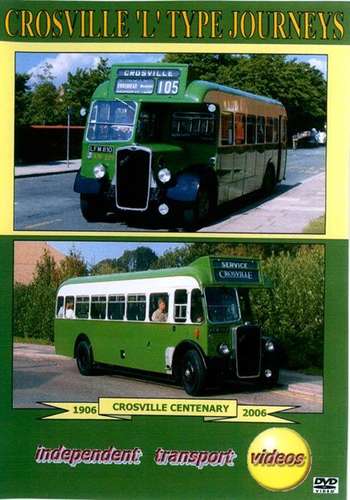 The year 2006 saw the 100th Anniversary of Crosville Motor Services. To celebrate this we produced a film celebrating a type of vehicle that played a major role in the life of that company during the 1950s and 60s - the Bristol 'L' type.

The first one we see operating is KW229 (LFM 810) a Bristol LWL6B with ECW B39R bodywork delivered in 1951, now lovingly preserved by John Prince. We took her out one sunny day in 2005 and recreated the 105 service that ran from Birkenhead Woodside to Meols. We join LFM as she leaves her 'depot' and runs to Birkenhead, from there we follow the route through the picturesque Wirral countryside. For parts of the journey you could be forgiven for thinking you have been transported back to a sunny day in, say 1952 as we journey through the village of Caldy, unchanged for decades. Proceeding on to Meols via West Kirby and Hoylake. You will be lost in the sounds from the interior shots and enjoy the atmosphere of the roadside views as we journey along the route from industrial Birkenhead to the leafy avenues of Hoylake and Meols.

Our next 'L' type journey starts a long way from Crosville territory, Taunton to be precise. KG118 (KFM 767) is a Bristol L5G with ECW B35R bodywork delivered in 1950, that was owned by Quantock Heritage, but is now in the hands of Jon Pratt. Jon is in the process of restoring KFM back to full Crosville specification. Our cameras joined Jon and KFM for a ride from Taunton to Weston-Super-Mare one summer day in 2004. You can make the interesting comparisons with LFM with sounds and sights as we journey along the motorway and trunk roads on this interesting trip.

We join KFM again, this time in October 2005 when she attended a running day based at Swindon. This time we journey through the Wiltshire countryside - not unlike some of the roads she would have been used to when operating with Crosville.

To finish off the programme we have some glances of the Llandudno Festival of Transport where former Crosville 'L' types can be seen operating with full loads. So sit back and transform yourself to a bygone age and journey with Crosville on a Bristol L.