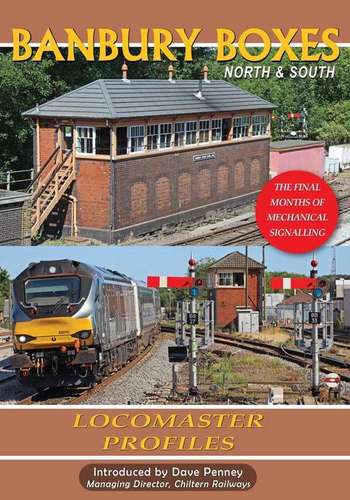 By the summer of 2016, Banbury was one of the busiest railway locations still using the Absolute Block method of signalling - a system that dates back to the 19th century. Banbury also retained many manually-operated semaphore signals, controlled by two signal boxes standing at either end of the station. With around 250 passing passenger and freight trains every 24 hours, the Signallers were constantly on their feet working the levers, block instruments and bells. Filmed inside both signal boxes in June 2016 shortly before the route underwent a £76 million upgrade, and using cab footage from passing trains, this programme shows how Banbury operated in much the same way as it did a century ago.

BANBURY NORTH BOX - early shift: The bells and levers are constantly in use as a steady stream of passenger and freight trains pass through the station. Along with Chiltern Railways and Cross Country passenger services are Great Western Railway empty stock workings and a Class 57-hauled charter train to Ascot. Among the passing freight trains are intermodal, automotive and departmental services hauled by Freightliner, DB Cargo and Colas Class 66 and 70 locomotives. There is also a driver’s eye view of the Up Goods Loop and its semaphore signals as seen from a Trafford Park to Southampton container service. Also includes the detonator farewell after the last North Box tour on the afternoon of 2nd October.

BANBURY SOUTH BOX - late shift: In addition to the manual lever frame, South Box also has an Entry & Exit panel controlling Aynho Junction and train movements on and off the Chiltern Line. It is very much a case of two signal boxes in one! There are also Banbury terminating and starting services for the Signaller to deal with – hence it is even busier than the nearby North Box. Featured here is the busy evening rush hour period between 17.00 and 20.00 with its increase in passenger services, which include the Class 68-hauled commuter trains out of London Marylebone. It includes the complex stabling move of the loco-hauled 17.21 service from London from platform 1 to the empty cattle road sidings. And there’s an almost endless stream of freight trains to deal with as well! Also features scenes from the final hours of South Box, including the handling of the last passing freight and the historic 7-5-5 ‘box closing’ bells to North Box in the early hours of July 29th 2016.

This DVD is introduced by Dave Penney, Managing Director of Chiltern Railways - the biggest users of the route through Banbury. This DVD has been produced with the full co-operation of Network Rail's signalling staff and provides a fascinating insight into the golden age of railway signalling. Sadly, the sound of ringing bells and clunking levers is disappearing fast as the rail network is gradually modernised. This programme is a historical reminder of a part of railway operation that is gradually being consigned to history.