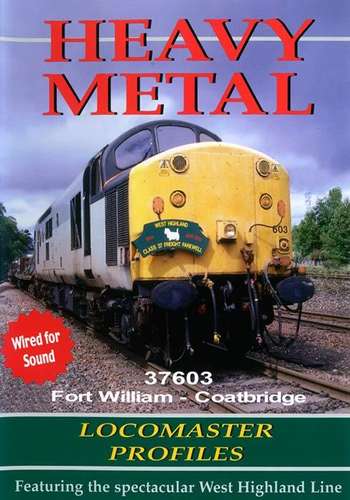 After Silver Bullet Syphons, this was the next most requested programme for re-release onto DVD. Heavy Metal is one of our noisiest Wired for Sound programmes and features 37 603 on a tortuous journey over the notorious West Highland Line.

Filmed in July 2001, it features Freightliner's now-ceased 7D54 Fort William-Coatbridge service. The trailing load is 400 tonnes and the 'Tractor' is given a serious workout over a challenging route.

June 2001 marked the end of another chapter in railway history when Class 37s ended their association with freight traffic on the West Highland Line.

The passing of the class on this traffic is commemorated in this 'Wired for Sound' spectacular as cameras and microphones are placed on board Freightliner's 7D54 Fort William-Coatbridge.

The programme not only features footage from the footplate of 37 603 but also a series of superb lineside shots of the train.

Having marshalled the wagons in the British Alcan plant at Fort William, 37 603 hauls the train the short distance into the station, where after a run-round, the loco sets off on a tortuous 140 mile journey with a consignment of aluminium ingots. Thanks to a wet start, skilful driving is needed to ensure that 37 603 gets to grips with its 400-tonne trailing load!

The first stage of the journey involves a massive 28-mile climb through Spean Bridge, the Monessie Gorge and Tulloch to the 1,350 foot high summit at Corrour.

The 37 takes a well-earned breather in the sunshine on the drop to Rannoch (via the Cruach snow sheds) before growling its way across the desolate uphill landscape of Rannoch Moor to the passing loop at Gortan.

Another drop ensues to Bridge of Orchy which marks the start of a 6-mile slog via to County March summit via the spectacular Horseshoe Curve which is taken at full bore.

After running downhill through Crianlarich to Ardlui there follows a delightful 8-mile section of route to Arrochar and Tarbet as the train skirts Loch Lomond in a series of 'ups and downs' and tight curves.

The departure from Arrochar and Tarbet marks the start of a four-mile 1 in 57 climb to Glen Douglas, a climb so severe that the Class 37 begins to wheelslip as it slogs its way towards the summit.

At Craigendoran the train reaches the shores of the Clyde estuary which it follows through Cardross, Dalreoch and Bowling.

The Glasgow suburbs are reached at Dalmuir where the 7D54 weaves its way across the city via Westerton, Cowlairs and Springburn.

There then follows a short sharp climb to Stepps before continuing to Gartcosh Junction and Gartsherrie South Junction.

Arrival at the Coatbridge Freightliner terminal signals not only the end of the 140-mile journey, but also the end of an era.