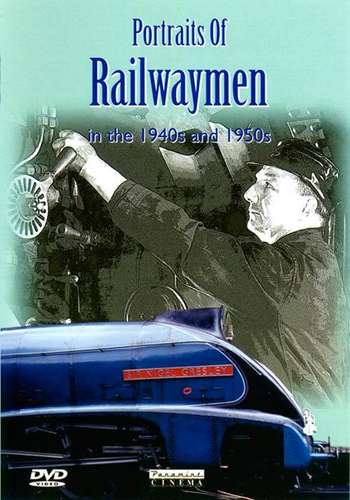 Four films about jobs on the railways in the 1940s and 1950s.In Shunter Black's Night Off, Joe Black's evening pipe is interrupted by a Luftwaffe raid on his marshalling yard. With incendiary bombs all around and an explosives van on fire, Joe has to find a locomotive and crew in time to shunt the burning van to safety.

Accompanied by action on the metals of the Big Four pre-nationalisation railway companies, The Railwaymen provides a fascinating insight into the working lives of these men.

The varied skills needed to run a railway, manufacturing engineers, engine drivers and firemen, signalmen, station masters, porters and clerks are described with conditions of service and rates of pay in this rarely seen film.

It includes a brief history of Britain's railways, with Leonard Sachs in a Victorian role anticipating his famous television programme "The Good Old Days".

The Vulcan Foundry is the setting for Portrait of an Engineer, as the camera follows production engineer Ted Wilson around his factory, where steam locomotives are being built for service on the railways of the world.

In a typical day's work we see the processes and skills required to build an engine, from drawing board to test running via molten metal and boiler trials.

British Locomotives shows the challenge faced by manufacturers by the demise of steam worldwide and the British Railways modernisation plan, which called for new classes of diesel and electric locomotives, including Deltics, to improve efficiency, cleanliness and maintenance.

Manufacturers seized the opportunity to design new engines for both domestic and overseas markets. However in a few places, including South Africa, British-built steam was to hold on as magnificent giants such as Beyer-Garratts ruled the veldt with their heavy loads.