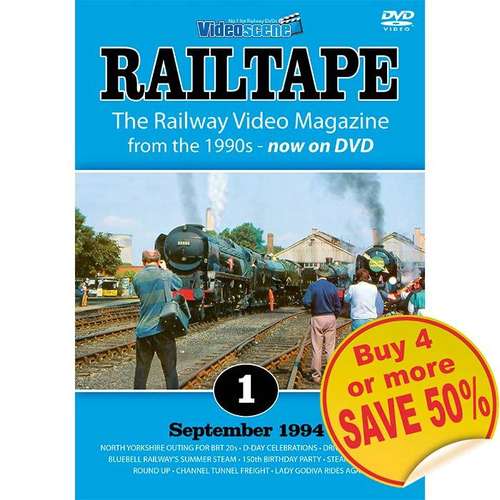 NORTH YORKSHIRE OUTING FOR BRT 20s: Nos. 20075 and 20187 were officially named Sir William Cooke and Charles Wheatstone respectively at the NYMR on May 28th before operating two return trips between Pickering and Grosmont.

D-DAY CELEBRATIONS: History was re-enacted and the U-Day landings were remembered in a number of ways. On the 3rd June Weymouth Quay played host to some American soldiers who survived the landings and as a mark of respect, no 73109 was temporarily renamed, for a month, ‘FORCE 'O' WEYMOUTH’. The 5th June saw SI5 class 828 joined by ‘King Arthur’ No 777 ‘Sir Lamiel’ and B4 ‘Normandy’ for a special outing - crossing Canute Road in Southampton, as did the boat and troop trains of 50 years ago.

DRIVER TRAINING UNIT: A further driver training unit has been put into use on Network South Central. It was unveiled to the press at a special run to Lewes station on 20th June.

BLUEBELL RAILWAY’S SUMMER STEAM: The Bluebell, one of the pioneers of railway preservation, acknowledged their association with the pre-nationalised Southern Railway by hosting a `Guildford Engines' weekend over the 1st and 12th of June. This was followed with a general steam gala on 25th June, using many of its locos which were not involved with Guildford shed.

150 BIRTHDAY PARTY: On the 12th June 1844 the Great Western opened its line from Didcot to Oxford. Exactly 150 years later, Isambard Kingdom Brunel's great-great-grandson, Mr. Peter Noble, re-enacted the opening at Didcot station. The gala occasion was attended by many local dignitaries, and Didcot Railway Centre and 5029 ‘Nunney Castle’ provided the base for the celebrations.

STEAM AND DIESEL ROUND UP: In June the GCR celebrated its Silver Jubilee with style. To mark the event ‘Jubilee’ class 5593 was especially repainted in black, numbered 5552 and named Silver Jubilee. Also in action at the weekend event were 34039 ‘Boscastle’ and 7029 ‘Clun Castle’. Our main diesel feature is a report on the East Lancs Railway's week long event from the 4th to the 12th of June. This event featured a wide variety of locos, many making their debut, and it is not hard to see why the East Lancs proclaims itself ‘The Premier Diesel Railway Line’.

CHANNEL TUNNEL FREIGHT: The Channel Tunnel project has moved another stage toward completion, with the inaugural run. ‘Le Shuttle’ trains are now frequently seen at Cheriton, where heavy goods vehicles regularly load and unload from the specially designed transporter wagons.

LADY GODIVA RIDES AGAIN: Coventry Station was the venue for the launch of the new Waterman Railways liveried class 47 No. 47710. We end this issue with the naming of 47710 and an interview with Pete Waterman.