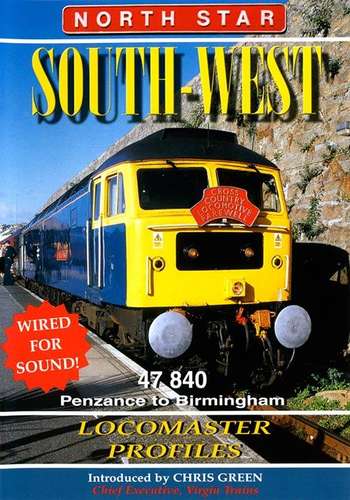 47840 North Star was the fifth and final Virgin Class 47 to be repainted into an historic livery to commemorate the end of Class 47 haulage on Cross Country services.

Representing the corporate BR blue era, the locomotive was a regular performer on Western Region passenger duties during the 1970s and early 1980s when it was numbered 47077.

On August 19th 2002 the loco reverted to this historic identity when, together with 47847, it departed from Penzance with Virgin's final loco-hauled 1M56 08.46 service to Manchester. Three days previous, North Star was given a final solo outing on the same train.

This programme, which is introduced by Chris Green, combines cab and lineside footage from both journeys to provide a nostalgic record of Virgin's last long-distance Class 47-hauled service.

To capture 47840 hard at work, the loco is 'Wired for Sound' to capture the famous 'Sulzer' sound.

With a demanding set of timings, North Star is soon put through its paces as it tackles a series of Cornish gradients - the 10-mile climb from Hayle to Redruth, the 1 in 78 standing start from Truro, the short sharp climb from Par to Treverrin Tunnel and the impressive slog up Largin Bank.

After crossing the spectacular Royal Albert Bridge, the 1M56 passes through the Plymouth suburbs before encountering the fearsome 'banks' of Hemerdon and Dainton.

There's a brief respite for the 47 as the train skirts the coastline along the sea walls of Teignmouth and Dawlish before reaching Exeter, after which there's a spirited run up to Whiteball summit.

Some fast running ensues to Bristol from where there's a rousing assent to Filton.

At Westerleigh Junction, the 1M56 heads north through Yate and Cheltenham to Bromsgrove which marks the start of the most demanding part of the journey - the infamous Lickey Incline.

After reaching the summit at 40 mph, the journey continues through the Birmingham suburbs to reach New Street Station via Proof House Junction.

The programme concludes with further scenes from August 19th's commemorative farewell as 47077 and 47847 haul an additional 1Z56 Birmingham - Derby before both locos take their place in an historic livery line-up at Toton TMD, thus closing yet another chapter in railway history. 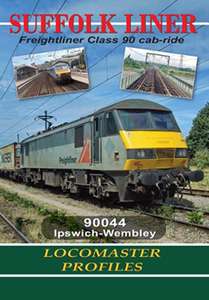