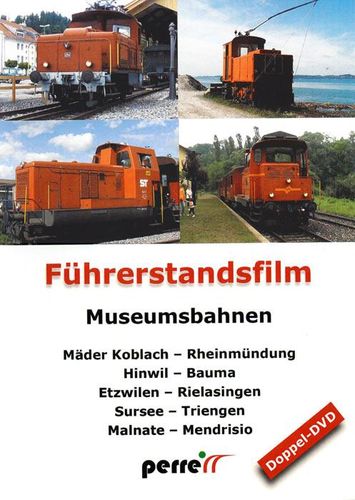 The museum railways are routes that are no longer in commercial operation today. Sometimes there are extra trips for the interested public and sometimes there are no trains at all on these lines (Malnate - Mendrisio).

The first museum railway belongs to the "Rhein-Schauen" company. It is about the former service railway with a gauge of 75 cm, which was built for the international regulation of the Rhine. The Rhine runs through the Rhine Valley to Lake Constance in a regulated river bed to protect the population from flooding. The railway was used to maintain the dams and was in operation from 1895 to 2006. The route network reached a length of around 40 km. Today around 18 km are still in operation as a museum railway (in Switzerland approx. 6 km, in Austria approx. 12 km).

The other museum railway lines are the Hinwil - Bauma railway line (passenger traffic closed in 1969), which is now operated by the Zurich Oberland Steam Railway Association (DVZO) on various weekends in summer, mainly with steam trains.

This is followed by the Etzwilen - Rielasingen line (passenger traffic shut down in 1969), which previously led continuously to Singen. A reopening of the remaining route in Germany is planned for 2018. The SEHR & RS association offers steam trips on individual summer days. The most striking structure is the 252 m long viaduct over the Rhine.

The Sursee-Triengen-Bahn (passenger traffic closed in 1971) is located in the canton of Lucerne. This museum train offers some steam trips in the summer, but it is also a feeder line to companies with freight transport.

The last museum train on the DVD is the line from Mendrisio to Malnate (passenger traffic closed in 1926). The cab ride begins in Malnate, Italy. It is the very last museum train that still traveled this route. In the meantime, the section between Stabio and Mendrisio has been converted to double lane and serves the S-Bahn traffic. The route is currently being extended to Varese.