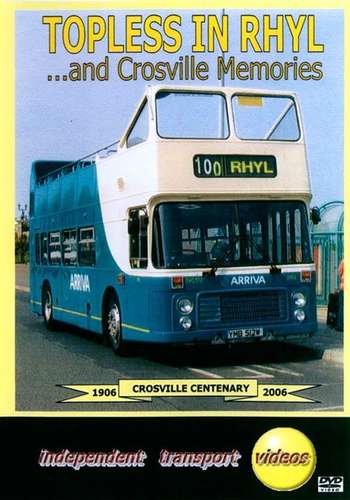 Sunny Rhyl' as it has always been known, has been home to open-top buses for many years. It was the mid 1920s that Crosville Motor Services made Rhyl its home. During the last 50 years the main type of open top bus associated with the town has been of the Bristol / E.C.W. combination. From 1956 right through to the early 1980s it was the Bristol Lodekka in both convertible and permanent open top form. These in turn were replaced by second-hand Daimler Fleetlines. In latter years the Bristol VRT has been the representative.

This DVD programme celebrates the types, starting with footage taken in 2003 of the VRs in service. We then go to 1st May 2004 when Arriva, the company that absorbed the final incarnation of the once mighty Crosville empire - Crosville Wales, ran their final Bristol VR bought by Crosville, OVG 512 (YMB 512W) for the day. We follow the bus during the day, travelling on both decks and filming many parts of the route between Rhyl and Pensarn with some spectacular results. Just for good measure there are also a few interesting visitors, as this was the day before the Llandudno Festival of Transport!

For the second part of the programme we are in for a rare treat! We have some 35 minutes of cine footage taken in the late 1970s and early 1980s from the camera of Graham Thorogood. This features many Crosville vehicles in service throughout the territory as well as the open-toppers on the North Wales coast.

To compliment this film we finish with a 'Photo Gallery' of Lodekka open-toppers from our own archive. Taken between 1971 and 1982 this will surely bring back many happy memories.