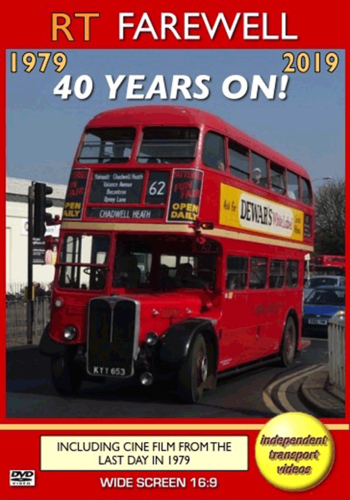 Many believe that the classic London bus was the RT (AEC Regent III). RT1, the prototype RT entered service in 1939, and this year (2019) celebrates its 80th year. Forty years ago on the 7th April 1979, the last RT ran in service with London Transport from it’s Barking garage on route 62 which ran from Barkingside to Barking ending 40 years of service from this almost 7,000 strong fleet of buses. On that date in 1979, these grand old buses were sent off in style by the public, enthusiasts and London Transport. Moving ahead 40 years to the 30th March 2019, a celebration took place at Barking to remember the events from forty years ago, when around 40 preserved RT buses assembled at the very same garage to re-live that day in 1979. The garage is now operated by Stagecoach London, as is route 62. So it is with great pleasure that independent transport videos can bring you a programme that features this superb celebratory event, which also includes archive cine film and a photo gallery from that day in 1979!

Our 2019 coverage starts very early at Barking garage as the RTs arrive for the day. We see them parking up and preparing to carry passengers once more. Filming takes place on Longbridge Road, which is adjacent to the garage, as well as inside the garage, recreating scenes from the days when the RT was the mainstay of the London Transport fleet. Our filming continues further along Longbridge Road as we see both red and green RTs (and a few RFs) in action working alongside the modern buses, which included some ‘New Routemaster’ (LT class) buses in East London Transit livery. Our cameras take a ride on RT4779 (OLD 566), AEC Regent III with a Weymann H56R body. It is operating on part of the 62 route, travelling to Chadwell Heath and then returning to Upney Lane close to the junction of Longbridge Road. On arrival we see the RTs lining up for a photo shoot in the garage yard. Stagecoach London kindly supplied an open-top ALX400 double-decker for use as a grandstand for the many photographers present. It was then time for the procession. Just like in 1979 the RTs left the garage for a grand cavalcade to Barking. The local police closed the road to all traffic so the RTs could leave en-mass. As this brilliant day came to a close the RTs arrived back at the garage to drop off their passengers and then return from whence they had come, ending a perfect day..

We now present a cine film shot by well-known transport photographer, Malcolm King, on the 7th April 1979. This is a fascinating insight into what was done 40 years ago to give the RT the send-off it deserved. We close with a photo gallery taken by your cameraman also on that day. We hope you enjoy this programme as much as we did presenting it to you.