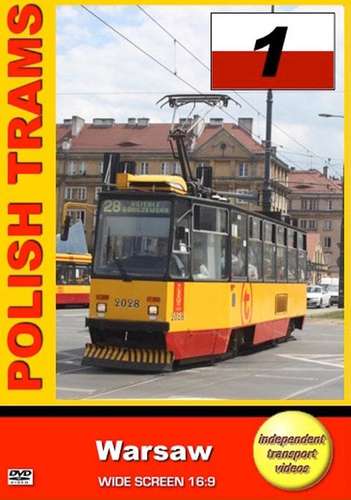 Warsaw is the capital city of Poland. The city extends on both sides of the Vistula River with the largest part and the city centre on the western bank of the river. The city was badly damaged during the Second World War but has been rebuilt to a very high standard including the old town. Horse trams began operating as far back as 1866 in Warsaw. Electric trams did not begin operating until 1908. Network expansion began in the 1920s and continued up until 1942 before the Germans in response to the ‘1944 Uprising’ destroyed the city. After the war, the system was converted to standard gauge as was extended to a great extent and is still being added to. During 2018 the independent transport videos cameras made an extensive visit to Poland to capture the tram systems operating in this interesting country. This, the first programme in the series concentrates on Warsaw taking in the city centre and the suburbs served by the trams. At the time of filming the trams were operated by Tramwaje Warszawskie that is part of the ZTM Warszawa transport system. This includes the Metro, SKM urban trains, KM regional trains and WKD local trains and buses.

The tram fleet is made up of some 400 Konstal high-floor vehicles in various forms of modernisation. These trams date from 1975 to 2001. Subsequently, some early part low-floor trams were built by Alstom Konstal (Konstal became part of Alstom). PESA has been the main supplier since 2007 with their Tramicus, Swing, Jazz Duo and Jazz types (The Jazz Duo is double-ended and the current Jazz type are short 19.3m vehicles). Tram 3001, a Konstal 112N, is unique to the fleet and can be seen on this programme as well as all of the types listed above. Our filming takes place over three days covering most of the system. Some of the city centre locations include Marszalkowska, Centrum, Al. Jerozolimskie, Dworzec Centralny, Plac Narutowicza, Plac Zawiszy, Solidarnosci, Bankowy, Nowowiejska, and Stare Miastro (Old Town). Our cameras take eleven rides on most types of tram to various suburbs and intersections. These include tram 3253, a PESA Swing on Line 1 to Okopowa, tram 3632, a PESA Jazz Duo on Line 23 to Park Praski, Konstal 105N tram 1243 on Line 28 to Rondo Radoslawa, tram 3807, a PESA Jazz (19.3metre) on Line 27 to Metro Marymont and tram 2029 a Konstal 105N2k/2000 (rebuilt and redesigned) on line 27 to Okopowa. A ride on tram 3272 a PESA Swing along line 4 takes us to Marszalkowska in the city centre. Further rides are on tram 3216 a PESA Swing on line 9 to Gocławek, tram 3123 a PESA Swing on line 3 to Al. Zieleniecka, trams 1402+1401 Konstal 105Nb on line 25 to Annopol, trams 1388+1389 similar Konstal 105Nb vehicles on line 25 to Kijowska and trams 1358+1357 Konstal 105Na type on line 28 to Osiedle Górczewska. You will also see a couple of preserved buses on this programme! Warsaw is a large capital city and has a tramway system to match it - we hope you enjoy your visit!