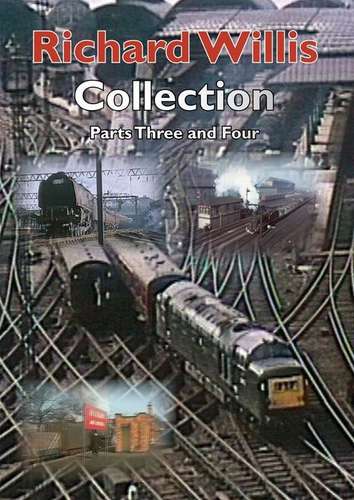 PART THREE – THE GRIME & GLORY YEARS
This, the third volume of Richard J. Willis’s collection of 16mm colour film of the British Railways scene in the 1960s and features one full hour of pure archive material.

Part One varies from the previous Main Line Steam Routes theme comprising a series of individual (linked) features that to our eyes really capture ‘Steam in the 60s’ with everyday steam, railtours and the occasional diesel (they were after all part of the scene!).

Part Two takes us again from Kings Cross to Newcastle (see Volume One) and then beyond to Edinburgh ending up in Larbert. This second (longer) trip allows a greater variety of classes to be seen.

Everyday Western Steam is viewed in action south of Hereford, with a 43xx, 57xx and a pair of ‘Halls’. Going to Wales for Manors sees 7819 plus 7802 on an SLS Special at Welshpool and Oswestry. At Stratford-Upon-Avon a grimy Clun Castle hands over to 70004. Less fortunate than 7029 was 5018 St. Mawes Castle by now resident at Kettering. Another scrap line at Crewe finds 45006, amongst others. Steam lives on in the station and in the shed area, which provides a great variety including an immaculate 46228. By contrast, back at the station, 46225 is in terrible external condition. Via Tamworth we move to Rugby Midland again finding Duchess of Gloucester, now in an even worse state! Cleaner examples – 46245 and 46251 – are seen on railtour duties.

Our final views of City of Nottingham were at Birmingham New Street, which on another occasion had hosted Peppercorn A1 W.P. Allen.

PART FOUR – OASIS OF STEAM
This, the fourth volume of Richard J. Willis’s collection of 16mm film of the British Railways scene of the 1960s, brings the story to its logical conclusion. As steam was eliminated across British Railway’s system some pockets of resistance remained, with steam dominant to the end. It is these ‘Oasis of Steam’ which form the theme of this DVD, showing everyday ‘working’ steam as well as the numerous special runs at the very end of steam.

This DVD covers Midland Branches, Main Line Medley, Southern Reprise, West to North West, ‘The Times are ‘a changing”, The End – 1968 and ‘Is There a Future?’.

Midland Branches: Seaton, on the edge of Rutland, is our starting point, where we see the last motor-fitted working in the country, the Seaton-Stamford, push-pull headed by 41225, also seen watering at Stamford. This is followed by a trip along the Great Northern’s Derby branch, an ‘oasis’ set deep in Midland territory.

Main Line Medley: Starting in Richard Willis’ ‘home territory’ we see the Great Central main line around Leicester, with a Black 5 and B1 at Frog Island, and another Black 5 at speed in glorious May weather, at Belgrave and Burstall. Standard Class 5 73045 and a 9F pass at speed, and, after a view of the station, we return to the outskirts of Leicester to see 92072 on a freight. 61144 passes through Charwelton and we have a brake-van tour at Croxton. A fireless 0-4-0T and a B1 work on Leicester’s Great Northern Branch, and then 61004 Oryx and 61028 work the Midland main line. At Syston Black 5 45282 and the Midland Pullman pass heading north, and we go to Oakham level crossing for a local headed by 75067. Finally, on the East Coast Main Line, we see 60007 Sir Nigel Gresley and 70020 Mercury on specials and 7029 Clun Castle on shed at Peterborough New England shed and on the ECML.

Southern Reprise: We go to Weybridge for some new and ‘alternative’ views of the South Western Main Line. Highlights include a pacing sequence of 34014 Budleigh Salterton, then a Standard 5 on a parcels and 35017 Belgian Marine on the Bournemouth Belle. Two standards, four rebuilds, one original and a U Mogul are seen, then out on the main line at Pirbright Junction six more expresses pass, whilst further on a milk train is on of the highlights. At Battledown a standard 5 passes over the flyover, as 35023 comes underneath. We wait for A4 60024 Kingfisher and then go to Overton for 70020 Mercury. Finally, a Pullman Camping Coach at Hinton Admiral leads us to Christchurch bank for two Bulleids and 4498 Sir Nigel Gresley.

‘The Times Are A Changing’: Blue electrics at Stockport introduce a visit to the loco depot to see Crabs and Jubilees. Bahamas is seen preparing for a railtour, then we see Alberta, 45562 at Normanton. Our first view of 70013 Oliver Cromwell is also here, but she’s then seen at Guide Bridge, as 60019 Bittern, which takes us to York on a railtour.

The End – 1968: Black 5s at Manchester Central and Victoria remind us of the halcyon days, and then we join an August 1968 railtour behind 70013 Oliver Cromwell from Victoria to Blackburn, passing rows of redundant 8Fs and Black 5s on the way. The very end is witnessed at Carnforth, with Black 5 45156, once Ayreshire Yeomanry, arriving on a special. In the shed yard, soon to become Steamtown, we see rows of dead Black 5s and then 45390 and 45025 are prepared to take out the last one of all – the 15 Guinea Special.

Is There a Future?: It seemed there was no future for steam on BR, so we go to Tyseley to view a 1968 Open Day, and to Bridgnorth to see the Severn Valley’s Gala in April. Richard Willis’ involvement is illustrated on the Great Central of today – the answer was ‘yes’.

The above is by necessity only an outline of each programme’s contents.

* Parts Three and Four are each approximately 50 minutes long. The disc runs for 100 minutes in total on one disc.