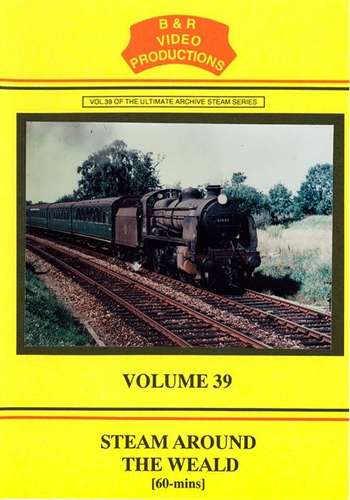 Out of the wealth of Southern Region films, and we certainly are no exception in producing them, the area in the south-east of England around the Weald was not captured on film that often.

Bob Todd did manage to cover the area reasonably well and along with Brian Lockey, Eric Hayman and Frank Wakelan we have produced a one-hour programme full of variety from 1958 to 1966.

Before the Kent Coast electrification began there was another nice tour, run with 30782 "Sir Brian", H and U classes.

Next the Gravesend to Allhallows and Westerham branches are covered and severn minutes of the Hawkhurst branch with H and C classes from the SECR.

On the Blubell line before closure (see Newick and Chailey and West Hoathley), and Atlantic "Beachy Head" at Brighton.

In 1959 a tour was run from Tunbridge Wells via Horsted Keynes with C2X No.32535 as motive power, watch this in full colour!

H class on Rowfast to East Grinstead services preclude coverage of the South-Eastern Limited tour up the Kent and East Sussex line, Christs Hospital to Guildford, scenes at Steyning and Ashford, moguls at Redhill and the last steam hauled "Golden Arrow" make this the ultimate Southern South-Eastern section DVD for the true enthusiast.