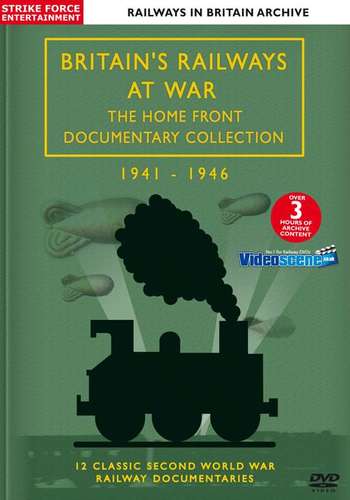 This is the original release from 2012, available again exclusively from Videoscene.

A comprehensive collection of original archive documentaries covering the wartime role of railways on the British home front and featuring a wonderful variety of period steam locomotives.

NEWSPAPER TRAIN (1941, 6 mins) Even during the worst air-raids of the Blitz, with the railways as a prime Luftwaffe target, the railways never failed to transport London printed newspapers to the provinces!

SHUNTER BLACK'S NIGHT OFF (1941, 7 mins) Shunter, Joe Black, heroically extinguishes a burning explosives truck through a meticulous and delicate manoeuvre across the points of a goods yard to the water tower.

THE ARMY LAYS THE RAILS (1941, 9 mins) Dedicated to the tracklaying and railway maintenance operations of the Royal Engineers including an armoured train and the firing of the railway mounted 'Boche Buster' gun!

DECONTAMINATION AND REPAIRS TO DAMAGED TRACK (1942, 20 mins) The equipment, precautions and procedures adhered to by a Southern Railway anti-gas team during a simulated gas attack on railway lines near West Hoathly, Sussex.

BUNDLES FOR BERLIN (1943, 13 mins) A celebration of the contribution of female employees across the Southern Railway; from locomotive cleaning and ticket collecting to light engineering and munitions manufacture in the railway workshops.

THE BURNING QUESTION (1943, 10 mins) A Southern Railway film on importance of fuel economy across the company including in the efficient and economic use of coal in the firing of locomotives.

GANG WARILY (1944, 9 mins) A dramatised illustration of the importance of adhering to general working safety practices on the Southern Railway.

CARRYING THE LOAD (1945, 24 mins) A retrospective celebration of the contribution made by Britain's Railways to Allied Victory in the transportation of casualties, troops, evacuees, workers, raw materials and munitions.

SERVICE FOR THE SERVICES (1945, 29 mins) The Southern Railway's support of the armed services with reference to the Dunkirk evacuation, the manufacture of D-Day equipment and the transportation of locomotives post D-Day between Dover and Calais.

WOMEN AT WAR (1946, 32 mins) A survey of the work of women on the Great Western Railway during the war including as train guards and shunter drivers and in rolling stock and permanent way maintenance.

PEEP BEHIND THE SCENES (1946, 29 mins) A film about the special manufacturing work carried out by the railway workshops of the Southern Railway including mobile workshops, hospital trains, D-Day landing craft and gliders.