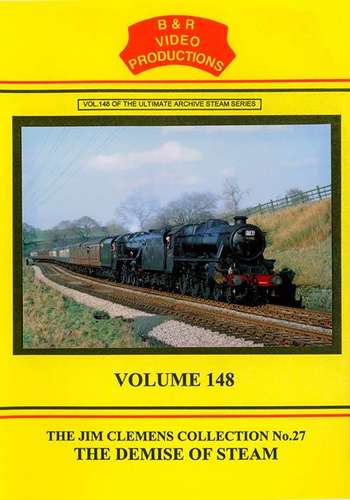 Jim Clemens Collection No.27. A record of the demise of steam on British railways during 1967 and 1968 in the North-West of England, seen mainly through the camera of Jim Clemens.

We feature scenes of steam at Crewe, Warrington and Preston followed by shed visits to Dallam, Lostock Hall, Bolton, Buxton, Northwich, Carnforth, Liverpool Edge Hill and Speke Junction. Then off to the Manchester area to see the last dying days of main line steam with Black 5s, 8Fs, 9Fs and Standards.

There were rail tours to Ravenglass and around the North-West in July and August 1968. We include the last tours from Manchester on the 4th.August 1968, especially the SLS tour plus some views of the very last steam hauled train on BR, the 15 Guinea Special on 11th.August 1968.

Into the early days of standard gauge preservation in 1968 and we cover the opening of the Keighley and Worth Valley Railway. We next visit Tyseley shed in September 1968 and finally 6000 'King George V' returned steam to British Railways in 1971 to end a record of what was to be seen in these declining years of steam traction.