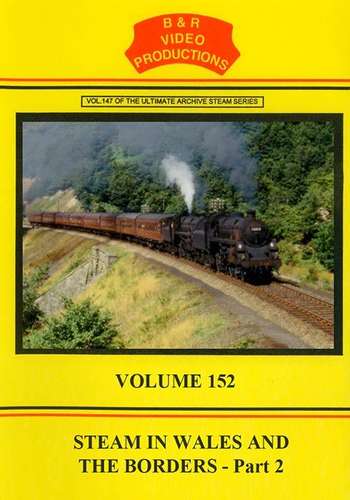 In this second part, we begin at Gobowen on the Shrewsbury to Chester main line before looking at the connection to Oswestry and the Cambrian line south to Llanymynech and Llanfyllin, prior to its closure in 1965.

We return to Gobowen with a stone train and then onwards to Shrewsbury. Steam finished here in 1967 and there is a rare appearance of the Blue Pullman amongst the Black 5s.

Onwards, we travel west along the Cambrian route to Machynlleth and Aberystwyth, using ex-GWR Manors and the later BR Standards for motive power.

Along the way we see steam scenes at the narrow gauge Welshpool & Llanfair Railway both before and after preservation.

The Vale of Rheidol is also visited when its original Aberystwyth terminus was in use.

Finally, with steam reigning supreme, we return to Shrewsbury via Talerddig Incline with some contrasting views of steam returning to the route in later years.

Included are some black & white film scenes of the estwhile Corris Railway. Manors, Halls, Black 5s, Ivatts and BR Standards are all featured, even a Dukedog!

The archive film material used is in colour, except for the Corris Railway scenes, with an authentic soundtrack and an informative commentary.