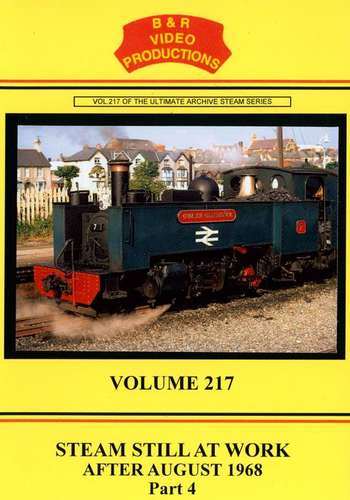 The fourth part in our 'Steam Still at Work' series of films which feature the steam scene both at home and overseas after the end of main line steam on British Railways in 1968. The series continues until the 'Return to Steam' tours on BR in October 1971.

We begin by visiting Woodham's vast scrap yard of over 200 locomotives at Barry Docks in South Wales, followed by lineside at Blea Moor on 11th August 1968 to witness the passing of the last BR steam train, 'The Fifteen Guinea Special'. Then to the solemn lines of dead and withdrawn locomotives at the former BR steam depot at Carnforth. All was not lost here as a lease had been obtained lighting a preservation era spark which would transform the site into 'Steamtown Carnforth' in subsequent years.

Next we visit the Keighley & Worth Valley and the Severn Valley lines in their very early preservation days. Quite a contrast to today!

Pockets of industrial steam still existed and we fine 'The Lady Armaghdale' and 'Isabel' working for ICI near Manchester before preservation. The NCB was the largest user of steam locomotives nationally after 1968 and we travel to Widdrington Colliery where the one-time 'J94' No. 68078 is seen at work.

'Flying Scotsman' made a final trip along the East Coast Main Line, complete with its two tenders, in August 1969 before heading to Liverpool for shipping to the USA. BR's only remaining steam, the narrow gauge 'Vale of Rheidol' line is visited followed by a trip around the Manchester Ship Canal system in September 1969. Steam was still active in Northern Ireland and operations are seen in 1969 including the famous spoil trains from Magheramore quarry to Belfast Lough.

We cross the Channel to France to enjoy the ruggedly handsome North American-built 141Rs at Boulogne. Plenty of steam could also be found in West Germany with the 012 4-6-2s on express passenger services (including a footplate run), heavy freight work with the class 044 2-10-0s and classes 023, 038, 050, 064, and 078 on a variety of workings. A cornucopia of steam! Portugal was another favoured haunt, even including narrow-gauge 2-4-4-0 compound mallets.

Back to Blighty for a visit to Tyseley's open day in September 1969, the LCGB 'takeover' of Bowaters paper mill system in October 1969, the Bluebell Railway, and finally to Didcot and the GWS, where ex-Wantage Tramway 'Shannon' is seen in steam for the first time since 1942.

Filmed entirely in colour, a commentary plus soundtrack complement this nostalgic look at working steam after August 1968. 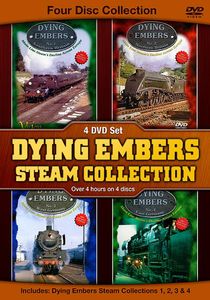