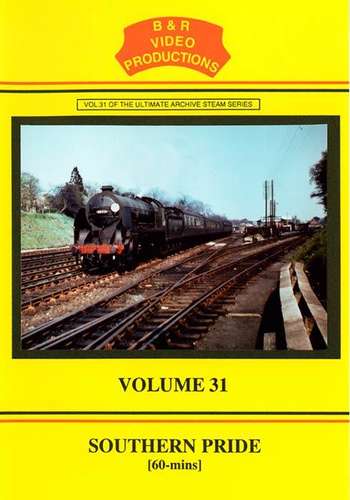 We have not produced a Southern Video since Volume 21 and to redress this balance we offer you "Southern Pride" viewing scenes on the Southern Region, for most part in 1961 and 1962, when so many of the engines so long associated with the Southern Railway were ending their time.

The scenes portrayed in this DVD come from the able photography of Jim Oatway whose camera work has been seen in many books portraying the steam railway scene in its last 10 years of operation.

Jim was a signalman working the boxes from Waterloo to Clapham Junction, and therefore had the advantage of knowledge of workings and a position by the track from which to record the very best of action on the ex-LSWR route out of London.

But intermingled with these were the odd Lord Nelson, King Arthur, Schools and Moguls with M7s on empty stock workings.

A typical summer Saturday of 1962 at Walton-on-Thames is shown and the variety at Byfleet, where freight to Feltham yards joined or left the procession of express passenger workings.

From thundering pacifics, the rural charm of Terriers on the Hayling Island branch and 02s on the Isle of Wight allow a few moments of calm.

Then we have the excitement of the "Bluebelle" specials on the main line at Haywards Heath with such noble motive power as preserved T9 No. 120, Caley Single No. 123, "Birch Grove" and the Adams Radial in 1963.

Beattie Well tanks put in an appearance in the London suburbs, all helping in their own way to make this a superb compilation of the "Pride" of the Southern Railway.