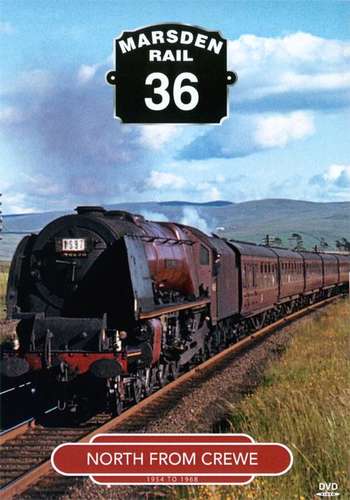 The programme features the West Coast Main Line north of Crewe in the 1960s - a period that saw major changes on Britain’s railways as diesel and electric traction displaced the steam locomotive.

With its locomotive works, depots and yards, Crewe was a major rail centre and, therefore, a magnet for enthusiasts attracted by the huge variety of operations to be seen in the area. Within Crewe Works there was always a wide range of locomotives undergoing repair and many of these are featured, along with scenes at Crewe North and South Sheds.

Leaving Crewe, scenes at Warrington’s Arpley Junction and at Wigan are followed by film taken at Preston.

Next is Lancaster Castle Station where, in addition to the regular WCML traffic, ex-LNWR electric multiple units operated services to Morecambe and Heysham. Six miles north of Lancaster is Carnforth, where numerous mainline workings and an organised shed visit are captured on film.

Film taken at Arnside on the line to Barrow is followed by scenes at the long-closed Milnthorpe Station, thirteen miles north of Carnforth - a location that marked the start of the rugged sections of the WCML.

Oxenholme is the junction for the Windermere Branch which, in 1964, saw regular excursion and goods traffic, with steamer services on Lake Windermere still operated by British Railways. At Oxenholme, Duchesses and first-generation diesels are featured, together with the banking locomotives that assisted heavy workings up to Grayrigg Summit, a short distance from Low Gill Junction where the Ingleton Branch joined the main line.

Views taken at Low Gill are followed by film at Tebay, from where banking locomotives assisted northbound trains on the infamous Shap Incline. Film taken at Tebay and Scout Green is a reminder of the challenge once posed by the climb to Shap Summit.

After Shap Station, the next major location is Penrith, junction for the long-lost line to Keswick and Workington and where, in April 1966, the last steam-hauled service to traverse this route is joined.

Twenty miles north of Penrith is Carlisle where a wide variety of steam traction could still be found working through Citadel Station in 1964. Lineside film showing the busy locomotive depot yards at Carlisle’s Upperby and Kingmoor depots is also featured.

The final sequence is over the Scottish border at Beattock Station, where film taken in 1954 recorded not only Clans and Duchesses being assisted by Beattock’s banking locomotives, but also the arrival of the newly-constructed Duke of Gloucester - a fitting visual record that brings the programme to a close.