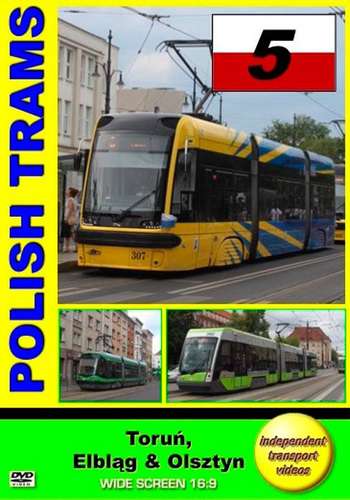 This DVD, the fifth in our series of Polish Trams takes us to three of the smaller systems, those in the cities of Toruń, Elbląg and Olsztyn.

Our independent transport videos cameras begin in the first of the cities, Toruń. Situated some 200 km northwest from the capital, Warsaw, Toruń began operating electric trams in 1899. Today the system runs on 22.5 km on metre gauge track and is operated by MZK Toruń. The fleet is made up of Konstal 805Na and 805NaD types dating from 1989 of which a number have been rebuilt or have had a modernised front fitted. Newer low-floor trams are made by PESA and are of the Swing-type in two different lengths (30.1 m and 19.4 m) and the Swing Duo, which is the double-ended version at 30.1 metres. Our filming takes place in the city centre at the busy Wały Gen. Sikorskiego junction and along Odrodzenia. Our cameras travel onboard PESA Swing Duo, 315 on Line 1 to Olimpijska and return to the city centre. A further ride is taken on tram 3017 a PESA Swing 121NbT (19.4 m) on Line 3 to Henryka Sienkiewicza, returning on 271 a Konstal 805Na on Line 3 that completes our visit to Toruń.

The second city on this DVD programme is Elbląg. Situated in northern Poland just 60 km southeast of Gdańsk, Elbląg began operating electric trams in 1895. Today Tramwaje Elbląskie ZKM Elbląg operates five routes on metre gauge track. The older trams are still painted in a cream and red livery, but new and rebuilt trams are in a smart bright green and yellow scheme. At the time of filming in June 2018 the fleet was made up of Konstal 805Na trams dating from 1980, PESA Tramicus 121N, MAN (Modertrans) M8CN (Ex. Augsburg, Germany) and three Duewag M8C (Ex. Mülheim an der Ruhr, Germany), still in their former operators yellow livery. They also operate a historic Konstal N1 tram in red and cream livery, and on our visit we see it in action towing modified Konstal 805Na, 063, which had broken down! Our filming takes place in the city centre at Rycerska, 1 Maja, Grobla świętego Jerzego and Plac Słowiański.

The final visit on this programme is to Olsztyn, which is situated 180 km north of Warsaw and is not far from the border with Russia. The first generation tram system opened here in 1907 but was closed in 1965. The second-generation system, which we see on this programme, has nothing to do with the past. This system was opened in 2015 and is operated by MPK Olsztyn on standard gauge track. The fleet is comprised of fifteen Solaris Tramino S111 trams. Finished in a smart bright green and silver livery they operate on three routes. Our filming takes place in the city centre at various locations. These include Kościuszki and Piłsudskiego, Skwer Wakara and Dworzec Głowny. Our cameras take a ride on tram 3008 on Line 2 to its southerly terminus at Kanta. From here we travel on tram 3001 on the Line 1 service to the city centre terminus of Wysoka Brama. A further ride is filmed on board tram 3000 on Line 2 from Dworzec Głowny to Skwer Wakara, which completes our visit to Poland’s newest tram system in the city of Olsztyn.