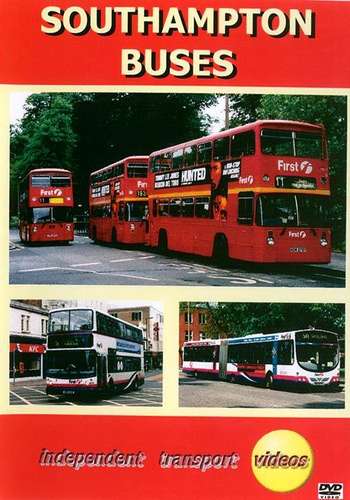 The bus scene in Southampton has undergone many changes in the last thirty years. This DVD programme documents the current day operations filmed mostly in 2003. Local services are provided by First Hampshire and Dorset in the now familiar 'Barbie' livery, although some of the older vehicles are still in former all-over red of 'Citybus' days. Double deck vehicles of the older order are Leyland Atlanteans with East Lancs bodies - probably still the largest Atlantean fleet still in all day service anywhere in the world!! Single deckers are Leyland Lynx and a variety of Dennis Darts. Giving a remarkable contrast are the Volvo B7LA / Wright Eclipse Fusion Artics, which will soon be moving north to Glasgow. Newer double deckers are Volvo ALX400s and mid-life vehicles are a fleet of Dennis Arrows which have moved down from First London, as well as some second-hand Olympians.

Filming takes place in the city centre, along Abovebar Street, Civic Centre and the busy bus station area. Spectacular shots are obtained on the Itchen bridge, with the QE2 visible in the background as she is about to make her final journey across the Atlantic before being replaced by the newer larger QM2. We take a ride on Atlantean 1268 just for good measure back to the city from the busy bus exchange in Woolston.

Our trip down memory lane is provided by rides on preserved Guy Arab 71 and 164. This was filmed in 2001 on the Town Quay area with other preserved members of the former Southampton City Transport fleet, including AEC Regents 350, 391 and 401.

You can also indulge in a Photo Gallery from the 1970s and 1980s showing Regents, Atlanteans and Swifts in service in the city centre. These are just some of the highlights in this programme, there are guest appearances from Solent Blue Line and Wilts & Dorset vehicles, so sit back and enjoy the ride!