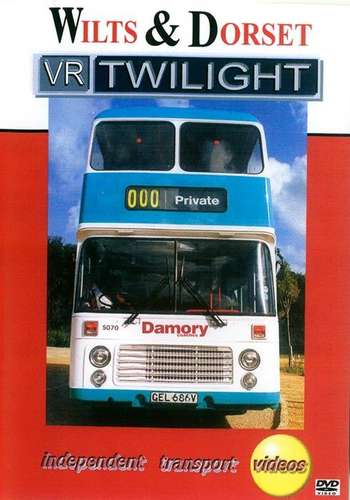 The Bristol VRT has been associated with the original and present Wilts & Dorset companies since 1974. Today's Wilts & Dorset was formed in 1983 from part of Hants & Dorset Motor Services Ltd., and operates a network of services in the Poole, Salisbury, Lymington, Blandford and Ringwood areas.

In 1993 Damory Coaches based in Blandford was purchased - of which a number of VRs have been transferred and are painted into the attractive Damory livery. The Bristol VRT is having an extended life with Wilts & Dorset - as a large number have been fully refurbished in recent years - featuring new windows, seat fabric and soundproofing.

This programme records the Wilts & Dorset VRTs in the Twilight of their careers. Firstly we feature a 'Photo Gallery' of VRs in service during the early and latter parts of their lives, so livery changes can be observed. We then take out Damory 5070 (GEL686V) on a tour of the beautiful Dorset countryside - from Poole to Wareham, Corfe, Swanage and through the lanes to Blandford. We then change to W&D liveried 4413 (BFX666T) for a run to Sturminster and back. Then rejoin 5070 back to Poole via Wimborne.

Current operations are observed in Salisbury, Poole, Weymouth, Blandford and on the roads of rural Dorset that have been the home to the VR for over 25 years.