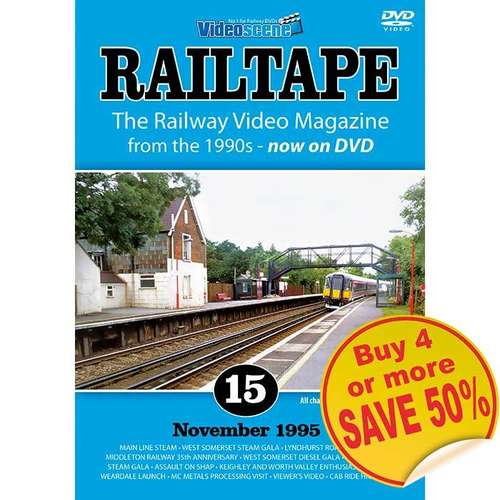 MAIN LINE STEAM: One of the wettest Septembers in recent memory, ended Railtrack's draconian ban on mainline steam running, and saw 30777 ‘Sir Lamiel’ on the 'Strong Countryman' tour from Reading to Bournemouth and back.

WEST SOMERSET STEAM GALA: Star attraction was ‘Dinmore Manor’, returning to service sixteen years after being rescued from Barry. One of the last engagements of the ‘Duke’ saw the Pacific on passenger duties, alongside resident engines, S&D 7-F No. 88 and Large Prairie 4160.

MIDDLETON RAILWAY 35th ANNIVERSARY: In June 1960, the unique Middleton Railway became the first standard gauge line to be re-opened by volunteers, beating the Bluebell Railway by a few weeks. The Leeds based railway celebrated 35 years in style with an impressive display of light and industrial locomotives, and services over disused sections of the complex.

WEST SOMERSET DIESEL GALA: We returned to Bishops Lydeard for a feast of modern traction at the railway’s three day diesel gala held at the end of September. Visiting ‘Western Prince’ was paired with resident ‘Western Campaigner’, alongside Warship D 832 ‘Onslaught’ from the ELR, D7017 representing the Hymek hydraulics, a 'Peak', Class 40 and Class 50.

SEVERN VALLEY STEAM GALA: The Severn Valley Railway's Steam Gala offered continuous operations over the weekend of the 23rd/24th of September. With the loco works open to the public and freight workings over Eardington Bank, true memories of the thirties were evoked.

ASSAULT ON SHAP: In what is being hailed as the most exciting spectacular in the annals of mainline steam running, three Pacifics, ‘60007’ Sir Nigel Gresley, ‘71000’ Duke of Gloucester and ‘46229’ Duchess of Hamilton acquitted themselves magnificently and effectively 'flattened' the notorious West Coast Mainline inclines of Shap with full-blooded performances.

KEIGHLEY AND WORTH VALLEY ENTHUSIAST WEEKEND: Although comparatively short compared with the West Somerset, six stations in five steeply graded miles presents a major challenge for locomotives, however, all engines performed admirably over the weekend. Another engine making a return to service was Standard Class 4 MT number 80002, lining up alongside LMS 0-6-0 No. 4422, Pannier 5775, 8-F 48431 and the North Staffs 4F.

WEARDALE LAUNCH: The replica ‘Locomotion’ was brought together with the original to launch the Weardale Railway's new fund raising initiative. This is the first time the two ‘Locomotions’ have met in preservation.

MC METALS PROCESSING VISIT: Our cameras went north to Scotland and the site of MC Metals, the company responsible for scrapping, and now preserving when apt, the majority of Scottish sector's engines and carriages. We spoke to Jim MacWilliam about the history and workings of the yard - and the very recent acquisition of a very special class 26.

VIEWER'S VIDEO: This month our viewer's video comes from Mr Stewart Higham and covers the movement of 31418 from Wigan to the Great Central. It is hoped that this latest addition to the diesel fleet at the GCR will make its debut at the March Diesel Gala, returning to green livery as D5522.