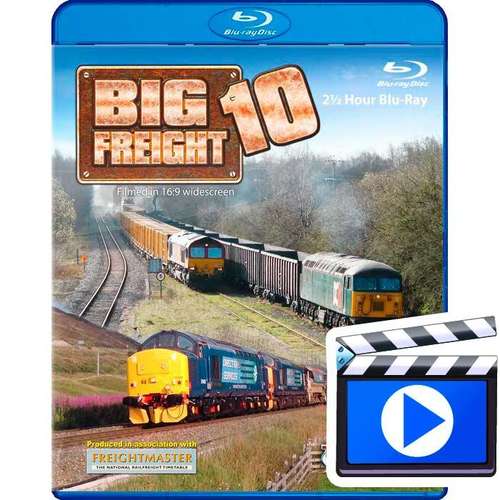 No.10 in the highly acclaimed and best selling BIG FREIGHT series. Produced in conjunction with Freightmaster   the National Railfreight Timetable   this programme features the best action from around the UK, with many freight highlights of 2013 including the return of ten Class 56 locos to the mainline and pairs of Class 37s on ballast trains.

Class 56 revival: An extended feature on the DCR operated Class 56 locos working spoil and flyash trains plus Colas 56s on log trains and 56105 on the Linkswood tanks. Nine different locos are featured.

Manchester   Roxby Bin Trains Part 1: Train loads of domestic and industrial waste may not be the most exciting freight flow but the Class 66/5 hauled GMC  Binliner  trains have an interesting pattern of operation, running along various freight only lines and branches. Part one looks at the Roxby end of the route with a diversion via Barnetby.

Network Rail Trains and Engineers Trains: A feature on the various loco-hauled yellow trains, measuring and scanning the line itself or testing radio equipment. Plus a mini-feature on engineers trains with various Class 37s and 66s hauling wagons, autoballasters and ballast cleaners.

To celebrate volume ten in the series this is a special 2  hour programme.