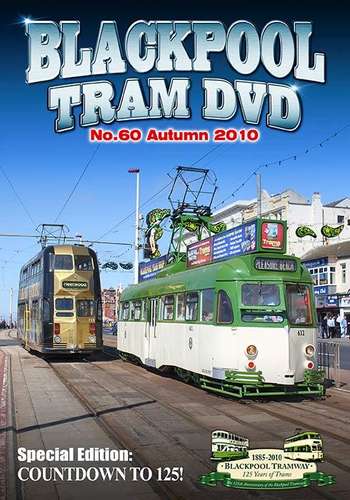 This special edition of the Blackpool Tram DVD covers the summer months of 2010 as the countdown to the 125th anniversary of the tramway continues.

As the disposal of the tram fleet continues, cars 619, 626 and 716 all left Blackpool during the summer and for the 125 events, Manchester 765, Lisbon 273 and Standard car 143 all arrived. There's full coverage of all the moves.

On the tramway, the highlight of the summer was the return to service of Brush car 632 in the 1970s green and cream livery following six years in store. See the finishing touches being made to the car and then its debut in June, running alongside Coronation 304 on enthusiasts tours.

The following day the annual Totally Transport event took place and 632 plus other 'trams of interest' were used. Highlights from this superb weekend in glorious sunny weather are included.

With the line to Ash Street Fleetwood reopened in July, double deckers and Twin cars returned to regular service. A typical day is featured with Balloons on Ash Street service, Twins on the new Pleasure Beach - Thornton Gate service and Boat cars on specials. See 719 and 723 in their new advert liveries plus 720 makes its first outing following a major overhaul.

As the 'Supertram' system gets closer, the third report on the upgrade looks at the track renewal in Fleetwood, new poles and wires at Rossall, tram stop platforms at Cabin and the new tram depot and track layout at Starr Gate. Fully updated footage.