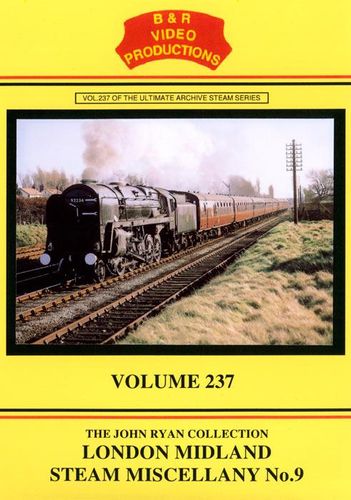 The ninth volume in our popular “Miscellany” series to cover London Midland steam. This time it is compiled entirely from cine film taken by John Ryan from the Wirral and assembled in the running order of the original cine film. There is coverage across England, Scotland, and Wales and we include previously unused footage from the B & R archives with the emphasis on London Midland material.

There is some excellent film across the Wirral which includes 9Fs hauling ore trains from the dock at Bidston via Storeton, Heswall Hills, and Burton Point to the John Summers works at Shotton - the heaviest regular unfitted mineral workings on the whole of BR. The line from Birkenhead Woodside to Chester is covered in detail, such as Birkenhead shed, Rock Ferry, Bebbington & New Ferry, Spital, Hooton, Capenhurst, and Upton-by-Chester. We then move to Gresford bank, Wrexham, the Brymbo branch, Ruabon, Cefn.viaduct, Chirk, Chirk viaduct Gobowen, and Shrewsbury.

An authentic sound track has been added along with an informative commentary to complement this further nostalgic look at the last years of London Midland steam.