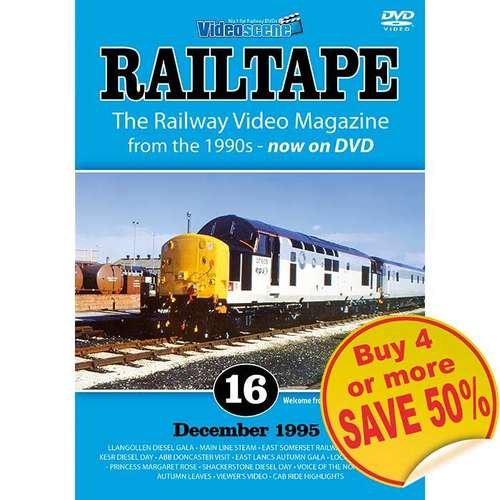 LLANGOLLEN DIESEL GALA: The Diesel Traction Group provided the star attraction at the Llangollen's diesel gala. Class 42 Warship No D821 ‘Greyhound’ became the first of its class to work over the line, along with the resident Class 23, 20 and Class 25.

MAIN LINE STEAM: After an absence of over thirty years, mainline steam has returned to Cornwall. ‘Bradley Manor’ and ‘Britannia’ headed for Penzance at the head of the ‘Duchy Explorer’. For this occasion ‘Britannia’ was running as the Laira based locomotive 70019 ‘Lightning’.

EAST SOMERSET RAILWAY STEAM DREAM: Originally the event was to mark the official opening of the line's new extension eastwards. However, last minute problems meant that the extension was not to see traffic. Regardless of this, the railway carried on with the ‘Steam Dream’ celebrations over the existing line, with double headers, frequent engine changes and outings by the new freight train.

KESR DIESEL DAY: The Kent and East Sussex Railway produced a wide variety of power for its autumn diesel weekend. Complementing the diesel service was the line’s Norwegian Mogul and 201 Hastings unit. The event was the last opportunity to ride the three car unit before a more customer friendly Class 180 takes over DMU services.

ABB DONCASTER VISIT: On the 25th October we were invited to Doncaster Works for two handover ceremonies including the first Class 37 generator van. The depot, which had seen the building of Flying Scotsman and Gresley A4s, now carries out heavy classified overhauls and modification programmes.

EAST LANCS AUTUMN GALA: A4 ‘Sir Nigel Gresley’, the ex-Carnforth LMS Black 5 No.5407, Ivatt Mogul 46441, David Sheppard's ‘Black Prince’ and the powerful 9-F number 92203, lined up for passenger duties over the eight mile Lancashire line. The gala also featured a banked freight service with the Hughes-Fowler Crab 42765, assisted by the veteran Lancashire and Yorkshire ‘A’ Class 0-6-0 between Bury and Ramsbottom.

LOCOMOTIVE PROFILE - PRINCESS MARGARET ROSE: Out-shopped from Crewe sixty years ago in July 1935, the LMS Princess Class Pacific handled 500 ton expresses over the challenging 400 mile West Coast route from Euston to Glasgow. Withdrawn in 1962 the engine spent many years at Butlin’s at Pwllheli before restoration at the Midland Railway Centre and a return to the mainline.

SHACKERSTONE DIESEL DAY: The four and three quarter mile line between Shackerstone and Shenton saw double headed Class 25s, the blue Class 14 visiting from the Nene Valley and a pair of 0-6-0s all in action for the Leicestershire line's diesel day.

VOICE OF THE NORTH NAMING: On the 31st October King's Cross, the oldest of the major London termini, played host to the latest Class 91 naming ceremony. Class 91 91026 became the 23rd of the 31 Intercity 225 power units to be named.

AUTUMN LEAVES: As leaves cause havoc on the line, we look at the new methods of dealing with the problem.

VIEWER'S VIDEO: This month’s viewer's footage comes from Mr J Parker, and records events over the 1993 to 1994 season at Tysley.