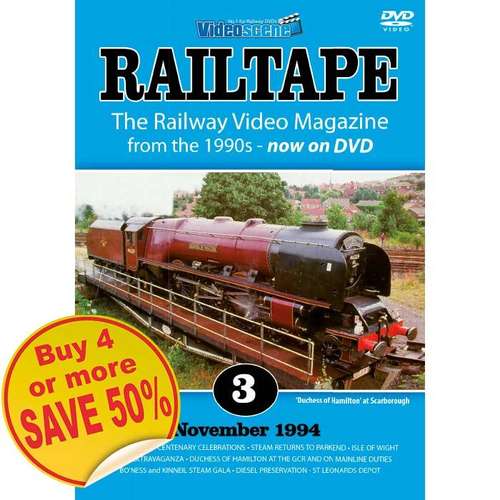 WEST HIGHLAND CENTENARY CELEBRATIONS: The highlight of this summer's main line steam season was the pairing of Gresley 'K4' 2-6-0 No.3442 'The Great Marquess' and the Peppercorn 'K1' 2-6-0 No.2005 for two consecutive days running over the Fort William - Mallaig line. However the main event to mark the celebration was a re-enactment of the opening ceremony performed 100 years ago, at Fort William station.

STEAM RETURNS TO PARKEND: Steam returned to the Dean Forest Railway's northern terminus during their summer gala weekend, with Swanage's 'half-cab' 0-6-0T. This was one of the first trains to arrive at Parkend since closure in 1970.

DUCHESS OF HAMILTON AT THE GCR AND ON MAINLINE DUTIES: On 28th August, 'The Duchess of Hamilton' returned to mainline service on a York to Scarborough excursion, the engines first mainline run for over a year. Prior to this, the 'Duchess' was to be found hauling passenger trains on the Great Central Railway.

BO'NESS and KINNEIL STEAM GALA: The line from Bo'ness along the Firth of Forth to Birkhill - a return journey of seven miles, saw visiting engines Peppercorn A2 No.60532 "Blue Peter" and K4 No.3442 'The Great Marquess' in service alongside resident engine No.673 Maude and Austerity No.19.

DIESEL PRESERVATION - ST LEONARDS DEPOT: The recent open day at St Leonards near Hastings marked the depot's fifth year as a preservation centre. BR locomotives of classes 33, 37 and 73 were on show over the weekend. Also present was Dutch owned 50 050 Fearless (D400) and Class 33/1 Preservation Group's 33 115 which has been in operation on Channel Tunnel duties.