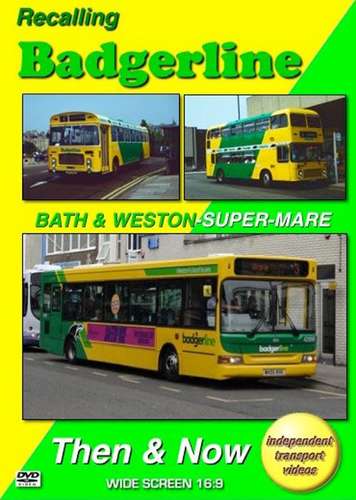 The Badgerline name first appeared on the side of buses in early 1985. It was as a result of the split of the large Bristol Omnibus Company emanating from the 1980 Transport Act. Badgerline operated its buses from depots at Bristol Marlborough Street, Bath, Weston-super-Mare, Wells, Highbridge and Chippenham. The subject of this DVD programme is to recall those buses running in Bath and Weston-super-Mare with the aid of some excellent archive video footage, shot in 1991, from the camera of Bristol Omnibus / Bristol Commercial Vehicles aficionado – Martin Curtis and a further short sequence taken in 1989 at Bath from the camera of transport photographer Malcolm King. The independent transport videos cameras have brought the programme up-to-date with sequences shot in both Bath and Weston-super-Mare during 2019.

The archive footage contains, as you would expect a myriad of famous bus types, now only to be found in preservation. Double–deckers are represented by Bristol VRTs, Metrobuses, Leyland Olympians and even a Bristol K Type! Single-deckers featured include the Bristol RE, Leyland National and Leyland Lynx, as well as an array of minibuses, branded as ‘Mini Link’.Volvo was just making an entry into the fleet with the Citybus double-decker and the B10M-61 Van Hool bodied coach. As Bath is a major tourist attraction for people from all over the world, it was and still is a great place to see open-top buses operating the ‘Bath City Tour’ around this Roman city. Here we see former London Transport ‘DMS’ open-toppers of Ryan’s Coaches competing alongside Badgerline open-top Bristol VRTs and Bristol K5G, 8583 (GHT 127) with an open-top ECW body dating from 1941. Martin visits many locations in and around the city including the former depot at London Road, Bath and the former bus station in the city that has now been replaced. He also visits the busy High Street at Keynsham, a town that is mid-way between Bristol and Bath. The itv cameras bring the story at Bath up-to-date with two visits in 2019. Here we see the current operators in the city. First West of England provides the bulk of services, along with Stagecoach and independents, Faresaver and Arleen. The Bath Bus Company operate the ‘Bath City Tour’ along with the ‘Airlinks’ service to Bristol Airport.

Martin then visits Weston-super-Mare where we see a Bristol RELL and open-top Leyland Olympians in action. Our cameras then record the contemporary scene, again with two visits in 2019. Here we see a return of Badgerline! First West of England rebranded their Weston-super-Mare town services in August 2018 as ‘Badgerline’.Using the green and yellow colours of the original operator now arranged in the current corporate style of Firstbus. We see Dennis Darts and Volvo B7TL – Wright Eclipse Gemini double-deckers turned out in this exceptionally smart livery. The country services are branded as ‘Excel’ and wear a smart orange-based livery.‘Somerset’s Coaster’ is the brand name for the open-toppers and closed top double-deckers that operate the coastal services around Weston and to Burnham-on-Sea. These buses are finished in a smart blue and orange colour scheme. On our second visit we see former Bristol Omnibus open-top Bristol FS6G L8579 (869 NHT) on a running day, and our cameras take a visit to the First depot at Weston-super-Mare to see some members of the fleet parked up. We hope that you enjoy this journey into the past recalling the Badgerline days!