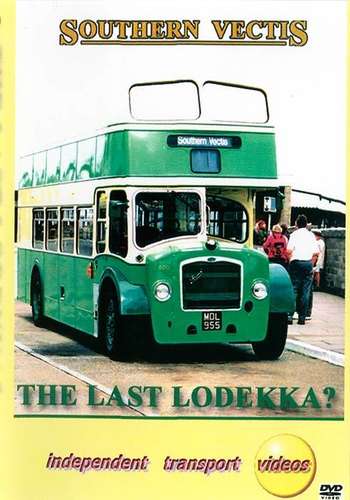 The Bristol Lodekka has enjoyed a long life on the Isle of Wight. From the first deliveries of Mark 1 LDs in 1954, the introduction of the FS in 1960, to the final FLFs in the late 1960s. Some of the oldest LDs have enjoyed a 'second' life operating in the form of open toppers. In the latter years, their domain was that of route number 42 from Freshwater to the Needles Battery. When new in the 1950s, they operated in a livery of Tilling green and cream, and later ran in NBC green and white. Then in OT form, there were a number of schemes from white and green, blue and green to all over Tilling cream, then to their final scheme of apple green and cream, matching the 'Old Girl' - the 1939 K5G reviving the original livery from the 1930s.

This programme follows 500 (MDL955) on the 'possible' farewell tour of the Island. Filmed on the 12th of August 2001, we follow her around the Island from Ryde depot to Bembridge, Sandown, Ventnor, Newport and out to Brook. We then take the 42 to the Needles Battery. Our camera rides on 500 as well as filming her through the picturesque villages, towns and the landscape of the Island.

There is a Picture Gallery of the Lodekkas in service with Southern Vectis. The DVD then reviews their operations in recent years.

Thanks go to John Woodhams for arranging the trip and driving 500 on a most enjoyable, memorable and historic tour - on a vehicle type that has served the Island for some 47 years.