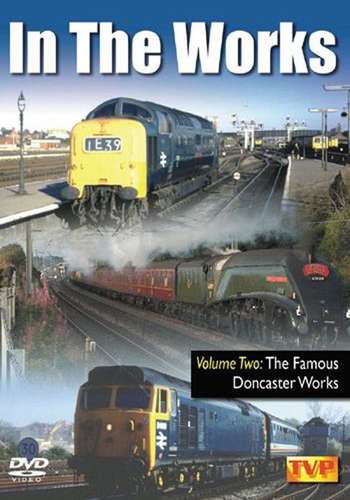 Doncaster’s long association with locomotive building began as long ago as 1853 when the first part of the Great Northern Locomotive Works was opened. Over the years ‘The Plant’ as the Works became known, grew in size. In 1899 work began on the Crimpsall Workshop which had a capacity of 100 engines.

In this programme we look back over the years at ‘The Plant’, featuring many of the famous locomotives built at Doncaster in action, including the worlds fastest steam locomotive ‘Mallard’, the ‘Flying Scotsman’, plus other classic classes including Ivatt Atlantics, Gresley V2s and Peppercorn A2s.

We also feature the diesel and electric classes that were built at the works, including the 85s and 86s, and the heavy freight 56s and 58s.

Over the years the Works has repaired and maintained a wide range of classes including the legendary ‘Deltics’. The Class 50 fleet was refurbished at Doncaster, and we look at these as well as other classes that received the Doncaster touch.

The programme also takes you behind the scenes. A variety of work is seen being carried out from minor repairs on Class 142 Pacer Units to major servicing of Inter City’s Class 91s.

Produced in 1995 with the full co-operation of BRML Doncaster this programme gives the viewer a unique insight into one of the Worlds most famous Railway workshop.