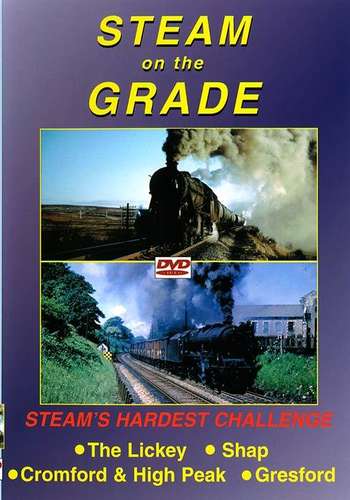 One of the finest sights of all is that of a steam locomotive working a heavy train up a steep gradient.

This programme brings the challenge to life by using archive film from the 1960s, showing some of the country's best known gradients.

Starting with the Cromford & High Peak Railway and the remarkable railway crossing of the high moors of Derbyshire, we witness J94s working on both freight and special trains, including scenes of the 1 in 14 Hopton incline.

We then move onto the famous Lickey incline to see Ex LMS, GWR and BR Standard locos attacking the grade during the 1960s.

A brief look at Gresford Bank on the former GWR from Wrexham to Chester follows with Ex GWR and BR Standards working on heavy freights on the grades to Brymbo.

This film wouldn't be complete without Shap. A wide variety of classes are featured on the legendary 1 in 75, including Duchesses and 9Fs on both freight and passenger.

We conclude with film of the 'Long Drag' and 'Ais Gill' on the spectacular Settle & Carlisle during the last days of steam.

Plus a bonus programme:

Main Line Steam on the Grade in the preservation era - scenes throughout the network and on the Devon Banks.

Across Britain By Steam Volume 2