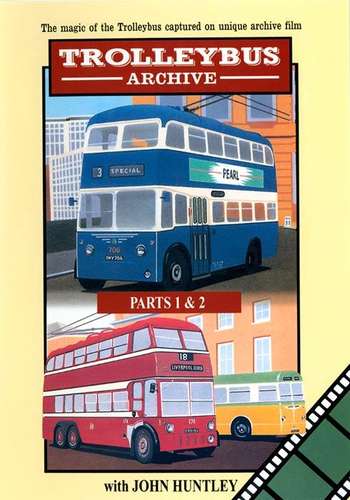 Trolleybus Archive takes a nostalgic trip back to the streets of Britain with 8mm colour cine, professional 16mm film productions and 35mm movie film shot for the cinema.

Originally released on two VHS videos, these two unique programmes are now compiled onto one DVD.

Programme One includes footage from the Southern Counties Touring Society filmed between 1948 and 1967.

There are highlights from the film 'Heart of the Trolleybus' which captures the workings of the Metrovick factory in Sheffield and excerpts from a very early promotional film made for Richard Garrett & Sons Ltd detailing their 'latest developments' in Trolleybus technology out on the near-empty roads of England.

Trolleybus Archive Take Two is 100% in colour. Peter Goddard's evocative archive features trolleybuses touring towns and cities in which they would never normally have worked such as Bournemouth, Cardiff, Teesside and Reading.

Finally there is the closure of the Maidstone system and the last day of operation in Huddersfield.