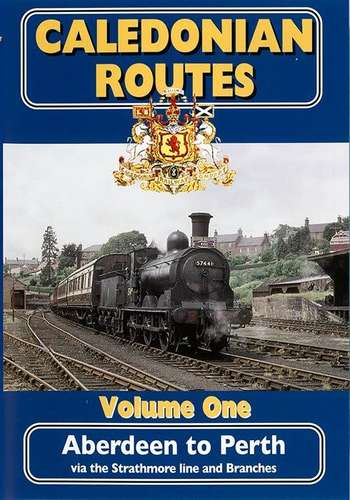 Inspired by the archive of Stuart Sellar the first volume of our comprehensive study of the railways of Scotland covers former Caledonian Railway metals between Aberdeen and Perth, our bid to offer as complete a coverage as possible leading to the inclusion of extracts from a staggering 27 cine collections.

One of the few mainlines in Britain to have completely closed, the Strathmore route, between Stanley Junction and Kinnaber Junction, gained legendary status as the last stamping ground of the A4s on the Glasgow - Aberdeen three hour expresses.

With the exception of Forfar the line passed through little civilisation, a fast direct route being chosen as the final section of the 'West Coast Mainline' to Aberdeen.

The branch lines built to serve towns in the foothills and on the coast offer a complete contrast to the high speed runs on the mainline.

After a brief introduction to the Caledonian Railway our programme starts at Aberdeen, the Northern outpost of the 'Caley'. Scenes from the 1930s, 1950s and 1960s include action at the Joint station and on shed at Ferryhill where A4 and V2 preparation is undertaken.

We continue south along the coast through Stonehaven and Kinnaber Junction to Bridge of Dun, now the Eastern terminus of the 'Caledonian Railway'. Scenes are principally from the 1960s, in colour and black & white, lineside footage is inter-cut with an A4 cab ride.

Maps, an informed narration, and 'then and now' scenes combine with the archive. The regular J37 worked Brechin freight and the last train to the City are included as we visit the branches to Brechin, Edzell and Montrose.

We rejoin the mainline to Forfar pausing en route at Glasterlaw to view the last down passenger train in 1967. 1960s scenes on Forfar shed are followed by 1930s views, including a 4-4-0 still in Caledonian livery.

In 1980 we pass through the station on one of the last passenger trains to visit Forfar before complete closure of the then truncated Strathmore line.

We continue to Arbroath, along the D & A Joint and back to Forfar via Kingsmuir. A classic sequence of a Lambie 4-4-0T shunting at Arbroath as a NB Reid Atlantic passes is among the highlights.

Freight action at Kingsmuir with a B1 and in the snow at Forfar in 1961 continues with a cab ride in a Pickersgill 4-4-0 on the truncated Forfar - Brechin route as far as Careston.

A4s, a Royal Scot, Black 5 and a Standard 5 combine to illustrate everyday services in the 1960s before we continue to Perth along the mainline, diverging with each of the branches en route.