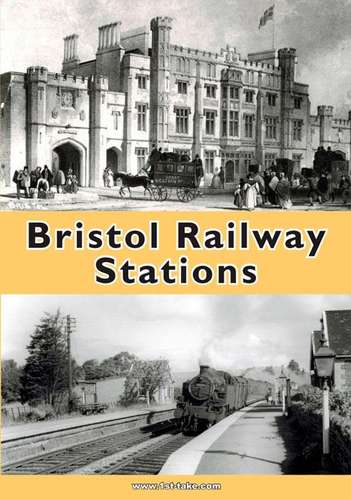 This superb tribute to Bristol’s railway heritage – which includes visits to over 40 stations and halts in and around the city, both past and present – begins at Brunel’s historic Temple Meads Station, which has been a vital transport hub since the early 1840s.

A number of other stations have also had an important interchange role, such as Stapleton Road which, for some years, served as the main Bristol station for South Wales and south coast trains not calling at Temple Meads. It was also an exchange point for passengers on the Clifton Down to Avonmouth line who wished to change to South Wales trains. In addition, suburban stations were used extensively for travel to and from workplaces a few miles further out, for instance Robertson’s Jam Factory in Brislington, Avonmouth Docks, and Filton aircraft works.

Excursion traffic was also important for a number of stations, such as Clifton Down where special trains conveyed passengers to and from Bristol Zoo, shows on the Downs and on day trips to the South West. As residential areas developed around the city, new stations were opened, including those at St Anne’s Park and Horfield.

The history of each station and halt is fully explained. Some have sadly closed, such as those at Mangotsfield, Fishponds, Ashton Gate and Hotwells. However, many still operate today, such as Lawrence Hill, Parson Street, Redland and Sea Mills. The film also gives a full update on the Filton Bank four-tracking project, which is doubling the number of lines between Temple Meads and Filton Abbey Wood. This is the biggest investment in the Great Western Railway since Brunel built it more than 175 years ago. Other highlights include a visit to the delightful heritage line, Avon Valley Railway at its Bitton headquarters.

This very special tour is enhanced by dramatic modern film, rare historic photographs and archive film excerpts, and is guided by Bristol-based author Mike Oakley, who has written a number of popular books on West Country railway stations. It ends triumphantly with the brand new electrification of the line between Bristol Parkway and London, which will help to deliver the full benefits of the new ultra-modern, high-speed Intercity Express trains.