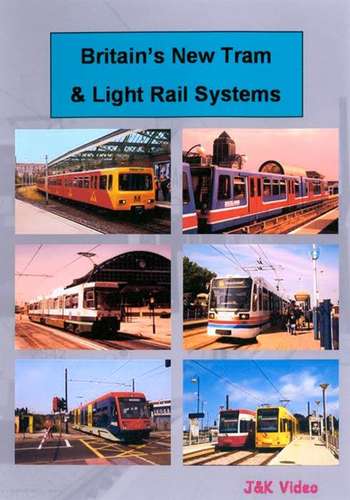 Britain's traditional tramways, with the exception of Blackpool and the Manx Electric, had all been consigned to museums by 1962.

The first system to adopt modern light-rail technology was the Tyne and Wear Metro, opened in 1980.

Following the success of the Tyne and Wear system, the automated Docklands Light Railway was introduced to stimulate development of the former London Docks.

This fully segregated and automated system opened in 1987, using third rail current collection, and has expanded progressively since.

The first example of the return of a street-running tramway came with the opening of Manchester's Metrolink in 1992.

This system was based on taking over two commuter rail lines, and linking them via street track to the principal railway station. It has since extended to Eccles.

The South Yorkshire Supertram opened in Sheffield in 1994 and is a 30.5 km mainly street-based system.

The next system to open was the Midland Metro, which opened in 1999, and linked Birmingham with Wolverhampton, using a former railway alignment, but with street-running in Wolverhampton.

The highly successful 28km Croydon Tramlink opened in 2000 and uses a combination of street-track, disused railway alignments and new construction. It has revolutionised transport to the major suburb of New Addington.

On this DVD, we look at the operation of all these systems, and see how light-rail can provide fast, reliable, efficient, and attractive urban transit.