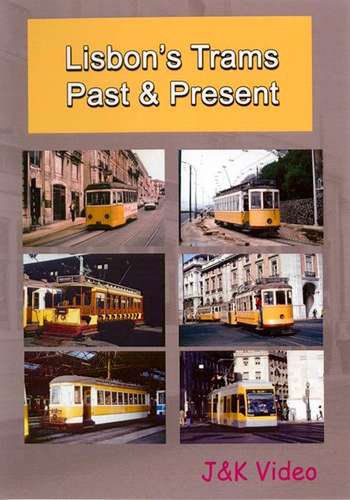 The exciting city of Lisbon has five tram routes today, one of which is mainly operated by modern, articulated cars.

The other routes are mainly operated by a fleet of 45 remodelled Standard cars.

The city is built on seven hills and there are three interesting street funiculars and a vertical lift which offers good views across the city.

The tram operator Carris also provides tourist trams which offer tours of the more interesting parts of the city, including the hilly Graca district, with its narrow, winding streets.

In this production, after reviewing the present scene, we take the viewer back to see many of the routes which have passed into history, including Poco do Bispo, Cruz Quebrada, Arco do Cego, Alcantara, Largo do Rato and Carmo.

We see and hear the American built cross-bench and semi-convertible bogie cars, lightweight cars and trailers in operation.

The tramway system reached its peak in 1958 and has been much reduced as the Metro has expanded, and road traffic has vastly increased.

There are scenes of British-built AEC and Daimler buses and the Estoril railway.

We see the remodelling of the present fleet taking place in Santo Amaro works in 1995.

Finally we visit the tram museum where a representative collection of historical trams and buses is displayed.