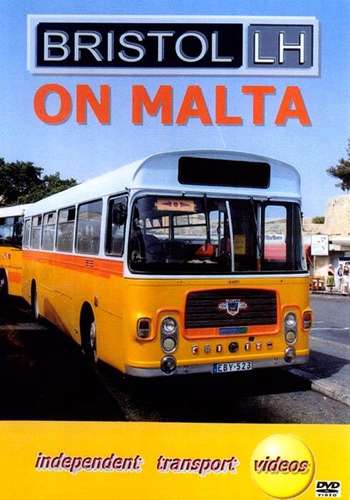 The Bristol LH has now become well established on the Mediterranean island of Malta. The majority of examples have come in the main from the erstwhile National Bus Company subsidiaries in England and Wales. Building on a previous programme, Independent Transport Videos return to Malta to focus on the activities of the Bristol LH.

Our programme starts at the busy bus station in Valletta, the island's capital. We concentrate on the LH as it goes about its business, often with full passenger loadings. Our cameras then take a ride on DBY 360, former Western National 1596 (NFJ 596M), on a circular service from Valletta to San Gwann. Here we savour the delights of a Bristol LH in public service on this busy local route.

After another spell at Valletta bus station we board EBY 523, former Hants & Dorset 3557 (GLJ 489N), on the long journey to the now disused airfield at Hal Far. We enjoy some spectacular scenery as we film from both the passenger and drivers' viewpoint. We also enjoy the interior of the vehicle which still bears the memories of its NBC days whilst reflecting the new life it now has in Malta. Former Crosville SLL626 (OCA 626P), now EBY 520 was captured by our still camera when just delivered to Sealand Road in Chester from the coach builders, ECW in 1976. Twenty-nine years later we take a ride on the former SLL626 on a busy service from Sliema to Valletta.

To conclude we present a Photo Gallery of the current Maltese Bristol LH scene. If you are a Bristol fan you are guaranteed to enjoy the final bastion of LH operation!