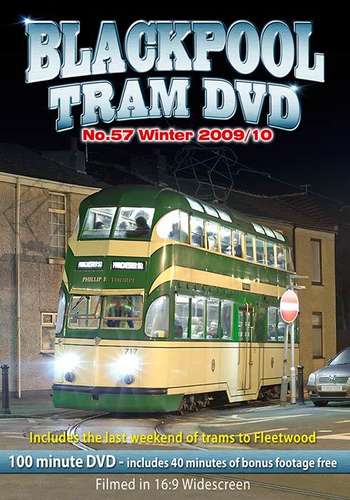 AUTUMN 2009
The sights and sounds of autumn 2009 with the return of the Western Train to Illuminations tour duties; 602, 604 and 605 on specials, 672+682 on an enthusiasts tour crossing at Broadwater and with attention focused on the Fleetwood end of the tramway, some unusual evening journeys are featured including an exceptionally rare post-midnight journey by 619 on specials and the Saturday evening when three Twin cars managed to make it to Fleetwood.

During the autumn, Balloon car 722 was scrapped and 720 emerged with its new wider central platforms - footage of both cars is included.

MAD WEDNESDAY
Wednesday 28th October was one of the best days for the tramway in a decade. With mild, dry and even warm(!) weather it was the midway point of the busy October half term week and Blackpool was bursting at the seams.

Filmed at North Pier from dusk at 5pm, see the events of this amazing evening unfold with Twin cars to Fleetwood, cars 40, 66, 147 and 706 on specials and tours, all four Illuminated trams work tours.

Then it gets serious - Stockport 5 appears - making its first passenger outing in 2009, a huge queue for Illuminations tours results in Boat cars 602, 604 and 605 all at North Pier TOGETHER!

Service cars and specials add to the scene and after filming for four hours, the cameraman takes a break with a journey on the top deck of 706 on what was the record-breaking 17th Illuminations tour of the evening!

At midnight the trams continued and the day finishes with cars 5 and 40 running into depot together.

LAST WEEKEND TO FLEETWOOD
Saturday/Sunday 7th/8th November 2009 was the final weekend of tram operation to Fleetwood prior to a three year closure and upgrade for 'Supertrams'.

Full coverage of the final weekend starting with 717 on a private hire on the Friday evening, service cars, specials and all the tours on the Saturday and Sunday, the final trio of 40, 702 and 627 from Fleetwood - and 627 arriving back in depot at 3.05am on Monday morning!

YEAR END
The entire operational Blackpool tram fleet as they finished the 2009 season. All 55 cars which ran in passenger service are featured.