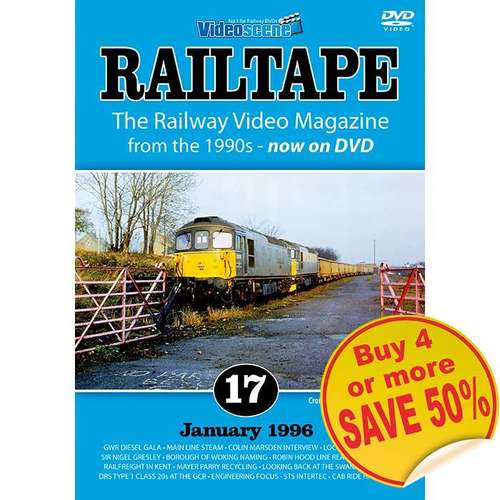 GWR DIESEL GALA: We open this edition at Toddington and the Gloucestershire and Warwickshire's last diesel gala of the 1995 season. The West Somerset's Hymek D7017 was to have been the main attraction for the event, however the engine failed and the GWR's growing fleet of preserved diesels was called upon to replace the stranded Hymek.

MAIN LINE STEAM: On the 4th November the Severn Valley Railway's mogul 7325, was out on the mainline and heading for South Wales. The occasion was the re-scheduled ‘Severn Valley Venturer’ railtour and the SVR 2-6-0 was in charge of the Stourbridge junction to Bristol leg where it was joined by ‘Britannia’ for the run to South Wales.

COLIN MARSDEN INTERVIEW: One of the most prolific authors on the current railway scene and best known photo journalist is Colin Marsden, Railway Magazine's modern traction editor. Part one of this interview tells of Colin's early interest in the railways, his years as a driver and subsequent career with the Railway Magazine. Also Colin tells us some of the criteria used when choosing photographs for publication. In part two, which appears on Railtape 18, he gives advice on how to get the best from your camera. Top tips from Britain's top modern traction authority.

LOCOMOTIVE PROFILE - SIR NIGEL GRESLEY: Doncaster Works number 1863 was the 100th Pacific produced to a design by Gresley. This was recognised by the naming of LNER No.4498 as ‘Sir Nigel Gresley’. Purchased from BR by the A4 Locomotive Society in 1966, the 'Streak' has been a regular performer on the mainline ever since. This profile highlights ‘Gresley's’ mainline outings over the last decade.

BOROUGH OF WOKING NAMING: The Surrey town of Woking has enjoyed a long and close association with its railways. On November 10th we joined the invited guests for a special naming ceremony at the busy outer suburban junction station.

ROBIN HOOD LINE REACHES MANSFIELD: For some 30 years Mansfield has claimed to be the largest town in England without a railway station. That ended on November 10th when Class 150/1 unit number 150018 broke the ceremonial banner and hauled the first passenger train into Mansfield Woodhouse station.

RAILFREIGHT IN KENT: Due to the run-down in locomotive passenger services, freight and engineering workings are becoming of increasing interest to railway enthusiasts. This viewer's video features five engineering trains, with Class 33 and 73 haulage, on the North Kent line down to the sidings at Queensborough on the Isle of Sheppy.

MAYER PARRY RECYCLING: Mayer Parry Recycling in west London also has links with the North Kent Line. The newly commissioned sidings off the Acton/Willesden line sees freight departures to the Isle of Sheppy twice a week.

LOOKING BACK AT THE SWANAGE RAILWAY: The recent opening of the Swanage Railway's extension through Corfe Castle to Norden has highlighted the tremendous changes that have taken place on this attractive line over the last few years. The extent of these changes became apparent when we revisited our archives in this latest instalment of the 'Looking Back' series.

DRS TYPE 1 CLASS 20s AT THE GCR: The Great Central Railway is being used for the trials of the DRS fleet, refurbished by Brush at their Loughborough works. Classified as Class 20/3, 20 304 was accompanied by the Type 1 Locomotive Association's green liveried D8098. It had been expected that a fifth refurbished Class 20 would be tested on the GCR, but this has been cancelled, so our visit marked the last day of these unique trials.

ENGINEERING FOCUS - STS INTERTEC: This 'engineering focus' identifies the system produced by STS for use on railway communication networks, where reliable operation in a safety critical environment has been well established over many years.

CAB RIDE HIGHLIGHTS: Glasgow (Central) to Edinburgh and return to Glasgow (Queen Street). This cab ride was recorded on 5th April 1990 aboard Class 107 unit no. 107747 on the 12:33 from Glasgow Central to Edinburgh, over a line of secondary nature, with basic stations and DMU service. Part two over the mainline to Glasgow (Queen Street) will conclude this cab ride on Railtape 18.