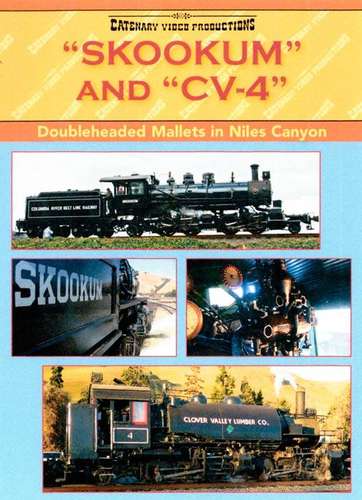 Catenary Video utilizes the art of Cinema to tell the complete story of a very old steam engine that rolled off a trestle, was abandoned, rescued by a railfan, changed owners, was moved twice, had parts lost, and is finally restored fifty years later, looking like she just emerged from the Baldwin Locomotive works! The 110-year story of the "Skookum" is told through interviews and illustrated with colour stills from the archives of Martin Hansen. A special section for modellers details the machinery and workings of this legendary locomotive.

The history of trains in Niles Canyon dates to 1862, before the completion of the Transcontinental Railroad. Once part of the vast Southern Pacific system, the tracks were abandoned in 1984. Today the rail line through the canyon is operated as the Niles Canyon Railway by the PLA. This fascinating program covers the story of two rare operating Mallet locomotives: the 1909 "Skookum" (2-4-4-2), and the 1924 "Clover Valley #4" (2-6-6-2).

The "Clover Valley #4" hauled logs on the Boca and Loyalton Railroad in Northern California. After being retired, she came to Niles Canyon, underwent major repairs, and is currently restored. Rare archival footage details her past.

This program will interest those who want to further their knowledge of how Mallet locomotives work, watch a locomotive rise from a debris field of parts, or take a cab ride filmed from unique perspectives.

Additional features include footage of the SP #2472 and a steam quadruple header!