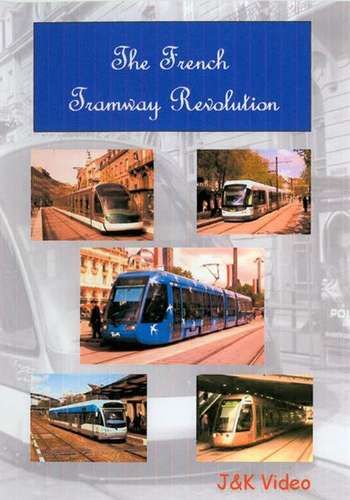 Trams had all but disappeared from French cities, with the exception of the lines linking Lille with the adjacent towns of Roubaix and Tourcoing, and single routes remaining in Marseille and ST Etienne.

This DVD starts by looking at these systems as they were in 1987.

It goes on to tell the story of the renaissance of the urban tramway in France, which began with the re-introduction of trams to the city of Nantes in 1985.

By the time this DVD was made, there were nine new systems in operation, with a further two actively under construction.

Each new system is portrayed, including coverage of the grand opening of the new tramway in Grenoble in 1987, when the whole city was in festive mood.

Next, there follows a detailed look at the new systems which opened in Paris (two routes), Rouen, Strasbourg, and Saarbrucken in Germany, with its cross-border link to Sarreguemines in France.

The new trams in St Etienne and Lille are also shown in operation.

Finally we visit the systems in Montpelier, Orleans, and Lyon, all of which opened in 2000.