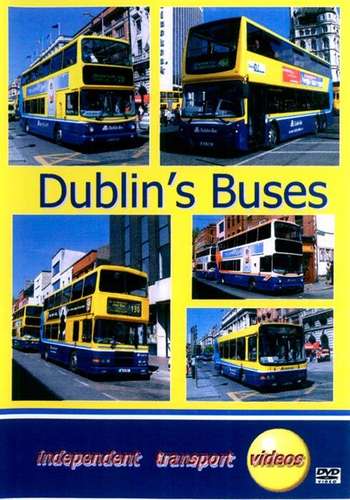 Our cameras have made three visits to this great city. During our first in 2003 most of the filming was done in the historic streets capturing the atmosphere of this bustling capital city. Areas featured are O'Connell Street and Bridge, College and Pearse Streets, the Quays and several other areas.

The second visit was made in October 2004 when, on a Saturday morning, we made a call to the large Broadstone bus depot, a good time as it happens, as many of the `Euro' fleet buses were parked up. This visit also revealed other interesting vehicles – second-hand Leyland Lynxes from Cardiff and some former Singapore Volvo school buses belonging to Bus Éireann. Later, there is plenty of action, as we visit O'Connell Street for a busy late Saturday afternoon.

We round off this programme with our most recent visit, that of June 2006 and in glorious sunshine. We start at Tallaght bus station with a run to Dundrum on RV524, a Volvo Olympian. In Dublin city centre we film in Amiens Street, Talbot Street, Beresford Place, Marlborough Street and the O'Connell Street area. Lots of action featuring many types of vehicle, most displaying the current Dublin Bus livery of two-tone blue and yellow.

We also visit the ferry port of Dún Laoghaire from where we ride into St. Stephens Green on board Enviro 500-bodied Volvo B9 VT1, sampling these massive modern buses. Now back in the city centre, our cameras capture the action on Dawson Street, Nassau Street and College and Pearse Street, as well as many other locations.

There are almost two hours of action here for you to enjoy, so take a seat and see what the Fair City has to offer to the connoisseur of modern bus transport!